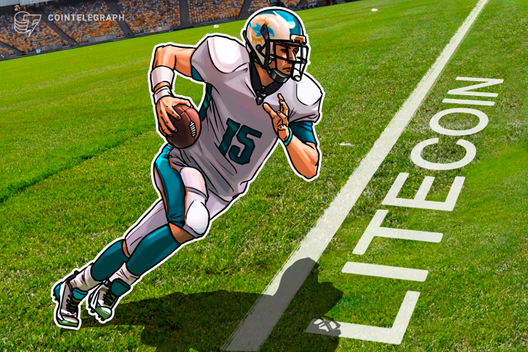 American professional football team the Miami Dolphins announced that Litecoin (LTC) is now the team’s official cryptocurrency, according to a press release on July 11.

The Miami Dolphins and Litecoin have also partnered with Aliant Payments, a crypto merchant services and payment processing firm, to enable crypto payments for the team’s upcoming 50/50 raffle, which reportedly donates half of its revenue to charity.

Cryptocurrency users will reportedly be able to buy raffle tickets with LTC and Bitcoin (BTC), and can do so online or via in-stadium kiosks at Hard Rock Stadium.

LTC and BTC are cryptocurrencies with similar technical underpinnings. Bitcoin remains the number one cryptocurrency by market cap with a total MC of over $201 billion at press time, while Litecoin clocks in at fourth with a cap of over $6.37 billion, according to data provided by Coin360.

In addition to playing a role in the aforementioned raffle, Litecoin will reportedly be appear in Dolphins in-game branding and an array of advertisement opportunities.

Charlie Lee, the creator of Litecoin and managing director of the Litecoin Foundation, hopes to use this partnership as a way to educate the public on LTC and cryptocurrencies in general:

“This collaboration propels Litecoin in front of an audience of millions of people around the world at a time where adoption of cryptocurrencies continues to gain momentum and the ecosystem is able to support real world use cases in ways previously not possible. We see this as a powerful way to raise awareness and educate people about Litecoin and cryptocurrencies on a tremendous scale.”