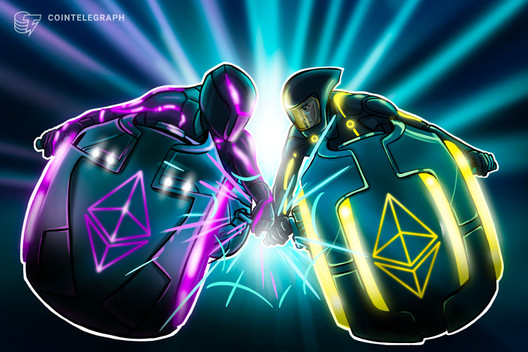 Ethereum founders Joseph Lubin and Vitalik Buterin and their respective organizations ConsenSys and the Ethereum Foundation are each donating 1,000 ether (ETH) to the Moloch decentralized autonomous organization (DAO).

This donation brings the organization’s total funds up to $1 million,  a Cointelegraph correspondent learned at the Ethereal Summit on May 10.

“Our objective is to accelerate the development of public Ethereum infrastructure that many teams need but don’t want to pay for on their own. By pooling our ETH, teams building on Ethereum can collectively fund open-source work we decide is in our common interest.”

Ethereum co-founder Vitalik Buterin previously acted as an advisor to a different Ethereum crowdfunding project, the Ethereum Community Fund (ECF), which was initially endowed with $100 million to go toward infrastructure developments. The ECF named their first five grant recipients at the beginning of 2018, and announced the second cohort of recipients in August 2018.

One example of these infrastructure development grants is second cohort recipient and crypto researcher Patrick McCorry’s work on improving the speed and security of Ethereum state/payment channels.

As previously reported by Cointelegraph, Lubin has high hopes for the future of Ethereum, believing that Ethereum will form the backbone for the next generation of the Internet:

“My feeling is this is just the next Internet. This is World Wide Web version three. We are going to be delivering applications that look like Web pages or Web applications or that look like mobile applications. They will just have this different kind of database in the backend that is a much more trustworthy database that enables easy interoperation amongst lots of other things.”