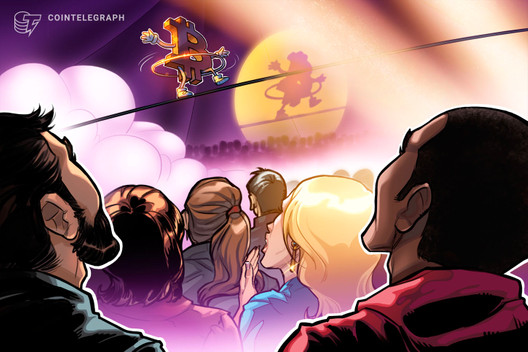 The world’s largest cryptocurrency, bitcoin (BTC), is not going to change the world as it is just a store of value, Galaxy Digital CEO Michael Novogratz said at ConsenSys’ Ethereal Summit on May 11.

Major bitcoin bull and former Wall Street exec Novogratz made his comments during a speech entitled “The Herd Is Still Coming!” at the industry event, which Cointelegraph attended as a media partner.

Starting with bitcoin, “as it came first,” Novogratz claimed that the coin has “really establishing itself as a store of value,” noting that it is “kind of finished” in terms of fulfilling its use case as a store of value. Novogratz also compares the asset to gold, arguing that both have value as a social construct.

Since bitcoin represents a store of value or acts as a “digital gold,” it is “not going to change the world,” Novogratz argued. He further stated that instead it is web 3.0 that “has the potential to change the world.” According to Novogratz, web 3.0 envisions a revolution in how networks function and data is treated as it is “a decentralized platform to process information. It’s separating data from the processing of it.” The investor noted that public ecosystems such as Ethereum and “lots of competitors are all vying for this space.”

Comparing various cryptocurrencies with chemical elements in the periodic table, Mike also considered the role of altcoins, hinting that each coin will have “to prove themselves out” in order to provide a certain use case. On this note, Novogratz argued out that “there’s no one building anything on the litecoin blockchain,” as opposed to the Ethereum blockchain, referencing a recent tweet of his.

Novogratz elaborated in his talk:

“If you really think bitcoin is gonna win this store of value, everything else needs to be used for something.”

Recently, Novogratz made yet another bitcoin prediction, claiming that the major cryptocurrency will beat its all-time-high record of $20,000 within the next 18 months.

Meanwhile, crypto markets have rallied since Friday, with bitcoin surging over 10% today to press time, breaking over the $7,000 threshold after trading around $4,000 for most of 2019.