On Jan. 7, activists of the French grassroots political movement the Gilets Jaunes — Yellow Vests — announced a bank run via social media, essentially hoping to meet their goals by destabilizing the local financial system.

Dubbed the “Collectors’ Referendum,” the movement’s latest demonstration calls on supporters to withdraw their savings from financial institutions on Saturday, Jan. 12. While the political action does not mention cryptocurrencies, it seems that such a run on the banks could hypothetically affect the crypto market — and vice versa.

A bank run entails a lot of people withdrawing their money from a given bank. It normally happens when investors start to feel that their bank may cease to operate in the near future.

As a result, a fractional-reserve banking system — in which banks keep part of their assets locally, usually at least equal to a fraction of their deposit liabilities — becomes challenged, while people start opting for other assets instead of fiat: for instance, bonds, precious metals or, theoretically, cryptocurrencies, as their decentralized structure might guarantee more independence from financial institutions.

There have been numerous bank runs throughout history, namely during the Great Depression and the 2007-08 financial crisis. However, according to academic research on bank runs, they tend to occur naturally due to panic and rumors among depositors rather than voluntarily, which makes it harder to assess the potential effectiveness of the Yellow Vests’ plan.

The Yellow Vests movement started in November 2018, when various posts on social media suggested blocking roads and using yellow, high-visibility vests as a symbol of solidarity and support (hence the name). Mass protests across mainland France followed, with the immediate cause being the carbon taxes on petrol and diesel introduced by the French President Emmanuel Macron. Consequently, the activists have demanded lower fuel taxes, the reintroduction of the solidarity tax on wealth, a higher minimum wage and Macron’s resignation.

Another crucial point for the Yellow Vest movement is the Référendum d’initiative Citoyenne (Citizens Initiative Referendum – RIC), the proposal for a popular referendum in which citizens could propose and repeal laws, amend the constitution or remove an elected representative. Essentially, it is a form of direct democracy akin to the one employed in Switzerland.

Over a few weeks, the protestors caused the French government to put its plans for fuel taxes and increased electricity tariffs on hold. Moreover, Macron has since introduced more measures to restore peace: namely, a minimum wage increase, a U-turn on a planned tax increase for low-income pensioners, and tax-free overtime payments and end-of-year bonuses. Nevertheless, the protests are still ongoing. The latest series of demonstrations, dubbed “Act VIII,” brought even more skirmishes onto the streets of France on Jan. 5.

“Act IX,” in turn, is scheduled for next Saturday, Jan. 12. And, according to some posts on social media, it is going to be accompanied by a bank run on top of more traditional demonstrations. Thus, speaking in a video uploaded to Facebook on Jan. 7, an activist named Tahz San says:

“For Act IX, we will scare this state legally and without any violence […] through the Référendum des percepteurs [Collectors’ Referendum]. […] We all know that the power of a country is not in the hands of the government but in those of the banks. If the banks weaken, the state weakens immediately. […] On Saturday, at 8 a.m. we will all vote by withdrawing our money […] till the RIC won’t imposed.”

It doesn’t matter the sum that will be withdrawn, and it is advised either to spend it at some artisan local shop or save at home “under mattresses, as did our grandparents,” according to San. In case of failure, the operation should be reproduced the following month.

The very same idea was soon voiced by Maxime Nicolle, also known as “Fly Rider,” a popular spokesperson for the grassroots movement. “Many people will withdraw their money from banks. Many, many, many,” he said while discussing the so-called “Tax Collectors’ Referendum” in a live broadcast on Facebook. “We are going to get our bread back. […] You’re making money with our dough, and we’re fed up.” The video has since amassed around 1 million views.

Therefore, the bank run’s advocates hope to force the French government to meet their demands through a nonviolent way. In other words, the Tax Collectors’ Referendum could be compared to the recent Proof of Keys event organized by entrepreneur Trace Mayer among members of crypto community. Timed to coincide with the 10th anniversary of the Bitcoin genesis block, the event aimed to motivate Bitcoin users to remove all coins stored with trusted third parties and take back control of their private keys.

How popular is Bitcoin in France?

The extent to which the demonstrators appear to support cryptocurrencies has not been measured, but some photos of an alleged protestor wearing a yellow vest saying “buy bitcoin” on the back has gone viral among crypto-oriented blogs. Additionally, similar vests are currently being sold on Amazon. 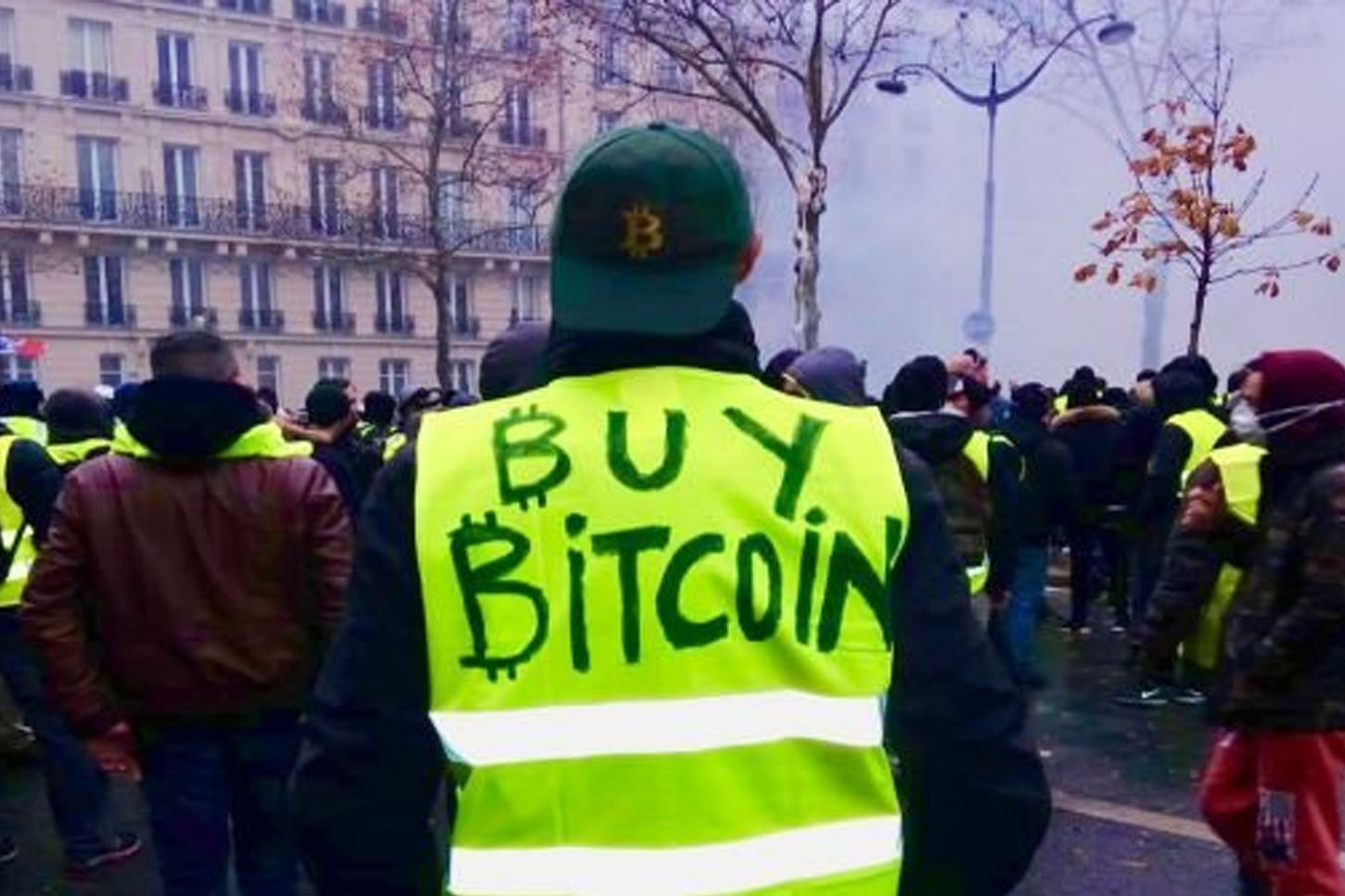 Moreover, for the 10th anniversary of the Bitcoin genesis block, French graffiti artist Pascal Boyart unveiled his wall mural titled “La liberté guidant le peuple 2019,” based on Eugene Delacroix’s famous painting of the French Revolution, but featuring people in yellow vests. According to Boyart, he hid more than $1,000 worth of BTC in it. The wallet address of the prize is public, with entrepreneur Alistair Milne encouraging Bitcoin users to donate to the project to further increase the size of the treasure. 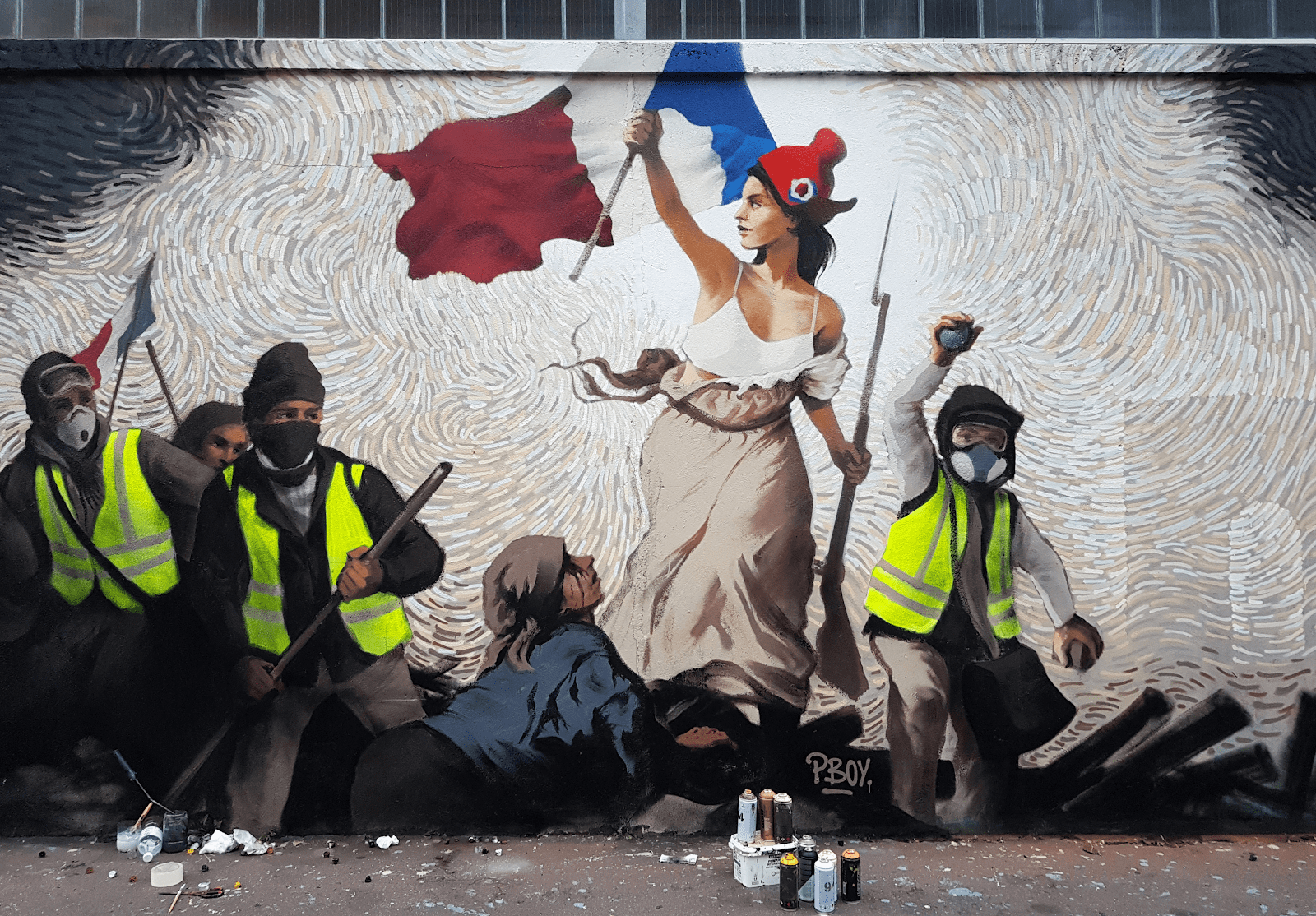 There are more definite signs that Bitcoin is enjoying mainstream recognition in France, however. In November 2018, the local tobacco federation (Fédération des Buralistes) obtained permission to sell Bitcoin (BTC) at tobacco shops starting from January 2019.

In a deal with French cryptocurrency wallet provider KeplerK, up to 4,000 small shops will sell Bitcoin vouchers in denominations of 50, 100 and 250 euros, which customers can then exchange for cryptocurrency on KeplerK’s website when they open a wallet.

However, in response to the news about the crypto-friendly license, the French stock market regulator, the Autorité des marchés financiers (Financial Markets Regulator), jointly issued a warning with the country’s central bank and French Prudential Supervision and Resolution Authority (ACPR) recalling the risks associated with “speculative” crypto assets.

Interestingly, a privately owned French radio network, Europe 1, insisted that the ACPR had “no choice” but to approve the sales due to the rate at which cryptocurrency was entering mainstream consumer consciousness. Despite the uncertainty, several tobacco shops in Paris have reportedly already started selling Bitcoin for fiat.

Overall, France has delivered mixed messages on cryptocurrency at the state level, mostly calling for international regulatory efforts. On the other hand, the head of French government’s cryptocurrency working group, Jean-Pierre Landau, has argued that over regulation would deliver a “three-pronged danger.”

“The danger is three-pronged: that of freezing the rapid evolution of technology in legislation, that of failing to grasp the real nature of the object we intend to regulate and that of pushing innovation towards regulatory avoidance. On the contrary, regulation should be technologically neutral, and in order to become so, address the actors and not the products themselves.”

So is the bank run likely to succeed, and what could it mean for crypto?

As the French magazine Capital states, the potential disruptive element of the upcoming bank run could technically be considerable: When banks start to collapse due to their inability to cover the costs of operating, the whole sector is likely to fail altogether. However, it also highlights the voluntary nature of the Yellow Vests’ bank run, noting that the eventual turnout is likely to be low enough so as to not initiate a crisis.

Capital also notes that the average amount withdrawn each day in France is 342 million euros, while around 126,000 people marched in France in support of Yellow Vests on Dec. 8. Consequently, at least 100,000 of them would have to withdraw around 3,400 euros to reach such an amount. Additionally, there are daily withdrawal limits tapped between 300 and 500 euros on debit cards for regular users, which would make the whole process more complicated.

“Triggering a bank run requires huge queues at the counters, very honestly I think the strike force of yellow vests is too weak to destabilize the sector even at the margin.”

As of November 2018, banks in France have a reserve of 449.7 billion euro in deposit accounts available for withdrawal overnight, according to data from the European Central Bank.

Still, fiat bank runs have contributed to the appeal of Bitcoin before, with Cyprus’s financial crisis in 2013 appearing to boost the price of the cryptocurrency.

According to a report by the largest French bank, BNP Paribas, the impact of the Yellow Vests’ movement on the French economy could be significant, but temporary. Banque de France estimated the impact on the economic growth in France would decrease in the fourth quarter 2018, from an expected 0.4 percent to 0.2 percent, due to the Yellow Vests crisis.

Thus, one can only speculate about the effects a French bank run could have on the crypto market and whether cryptocurrencies could also streamline the protest. For instance, Max Keiser, host of the RT show “Keiser Report,” believes:

If every French person converted 20% of their bank deposits into #Bitcoin (and got a Bitcoin debit card to use for day-2-day stuff), French banks and the government would collapse and a lot of bloodshed could be avoided. #jilletsjaunes #JeSuisSatoshi pic.twitter.com/stKqKHYHWl

Crypto Is Among SEC’s Top Examination Priorities for 2019

2018 Sees 550% Uptick in Exempt ICO Securities Offerings Filed With the US SEC: Report