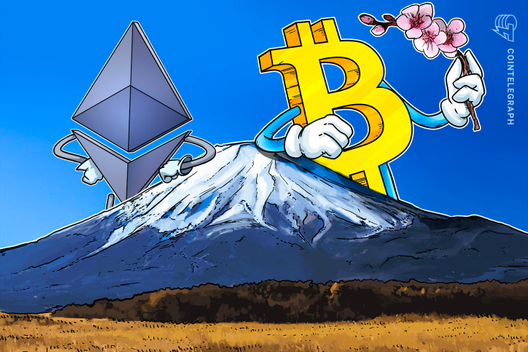 Japanese cryptocurrency exchange Taotao is expected to go live at noon on May 30, as per the company’s official Twitter page.

Notably, the new trading platform is heavily backed by Yahoo Japan, marking the local internet giant’s arrival into the field of crypto. The timing seems to be on point, now that the market has finally shaken off the bear. But how likely is Taotao to dethrone its competitors — both current and those to come — in a complex market such as Japan?

What is Taotao, and how exactly is Yahoo involved?

The Yahoo Japan-backed platform was first mentioned in March 2018, when local newspaper Nikkei Asian Review reported on the corporation’s plan to acquire 40% of BitARG, a Tokyo-based cryptocurrency exchange, and to subsequently launch its own full-fledged platform “in April 2019 or later.”

Reportedly, the purchase of BitARG shares would be made through Tokyo’s YJFX, a retail foreign exchange broker wholly owned by Yahoo Japan, Nikkei revealed. Yahoo Japan, in turn, is a joint venture run by American internet company Yahoo and Japanese holding company SoftBank. It is reportedly the largest internet provider and payment processor in the ‎country, which surpasses Google and PayPal in the respective fields.

Initially, BitARG denied such a deal was taking place, but the acquisition was soon confirmed both by Yahoo Japan and BitARG. According to different reports, the 40% stake cost the internet corporation between 2 and 3 billion yen (around $19-27 million).

As per Nikkei, YJFX senior managers and engineers were sent to BitARG in April 2018. Their mission was reportedly to develop the new exchange system and work “on a corporate governance structure, a customer management system and internal controls.” The new exchange was expected to be “newly built but based on BitARG’s system,” the media outlet clarified.

Starting from March 2019, prospective users could sign up for a Taotao account and participate in a promotional giveaway scheme. The platform had originally planned its debut in mid-May but then postponed the launch at the last minute without explaining the reason.

The exchange will be open for Japan-based clients only. It is not clear whether it ever intends to expand to other countries. Cointelgraph reached out to Taotao for further comment, but the company has not produced a statement as of press time.

Notably, BitARG had been cleared to serve in the Japanese market at the time it was purchased by YJFX. The exchange secured its license with the Financial Services Agency (FSA) — the national financial regulator — back in December 2017, meaning that Taotao automatically obtained the permission to trade cryptocurrencies.

“It’s not so much entering the market but re-entering it, using the marketing expertise and financial muscle of Yahoo Japan,” as Maurizio Raffone, founder and CEO of Finetiq Limited, a Tokyo-based management consulting company, explained to Cointelegraph.

As per Japan’s Payment Services Act, amended in April 2017, all digital currency exchanges in the country are required to be registered with the FSA. The agency has granted the most compliant players with licenses.

It seems safe to assume that Taotao took the easy path to the local market — the FSA is known to have a tight grip on crypto exchanges operating on Japanese soil, and securing a license from scratch is a lengthy and complicated process. In fact, as many as 190 new exchanges were reportedly pending the agency’s approval to enter the market in December 2018.

The strict scrutiny comes as no surprise, given that the country has witnessed the two largest crypto hacks in history: namely, last year’s $532 million Coincheck break-in and the notorious crash of Tokyo-based Mt. Gox.

In the wake of these security breaches, the watchdog has been taking numerous precautions, including on-site inspections of exchanges’ offices and mandatory risk management system reports. Most recently, the FSA was reported to be in the midst of a crack down on crypto exchanges that offer anonymous transactions or have weak identity verification practices in preparation for inspection by the Financial Action Task Force (FATF) this fall.

Despite already having a license, Taotao should still keep in mind the FSA’s firm requirements, Raffone told Cointelegraph:

“The FSA’s requirements for crypto exchanges are becoming more and more stringent and over time one can expect them to converge with the high standards of the traditional securities industry. Having said that, with the rising costs of compliance and cybersecurity eating away at crypto exchanges’ profitability, the business model architecture for Taotao would need to have suitable margins to ensure its sustainability.”

Notably, the watchdog’s tough supervision has prompted some major players to quit the Japanese market. For instance, Binance, one of the world’s largest crypto exchanges that had once opened its office in the country, turned to Malta — the famously crypto-friendly state — after the Japanese regulator had slapped it with a warning in March 2018. Similarly, local social messaging app Line has also decided to exclude the domestic market prior to the launch of its cryptocurrency exchange, citing local regulatory difficulties.

As of now, the majority stake (60%) in Taotao still belongs to CMD Lab, BitARG’s parent company, which had wholly owned the exchange prior to the deal with YJFX. Neither company has responded to Cointelegraph’s requests for comment.

Notably, Taotao seems to be entering the market in the midst of reignited interest from Japanese cryptocurrency holders. As Cointelegraph Japan reported earlier last week, local digital asset exchanges have seen new account openings increase up to 200% in the past two months. More specifically, data obtained from three large trading platforms — Bitpoint, DMM Bitcoin and Coincheck — showed a major increase in interest from entry-level investors since the end of March.

The change in habits among those who presumably did not use cryptocurrency before indicates the impact of rallying prices on public interest, which rose with the return of a bull market.

“Given the positive momentum in crypto prices following the so-called crypto winter, I think it is certainly a good time for Taotao to take advantage of this upswing,” Raffone told Cointelegraph.

J. Maurice, representative director for Tokyo-based WIZ K.K., also agreed that the timing is especially advantageous for the Yahoo Japan-backed cryptocurrency exchange, given that “it’s the beginning of a new bull run market cycle.”

However, Maurice warned that the Japanese public might still be hesitant to leave the long-established trading platforms for the new exchange.

“I can’t see bitFlyer losing their spot at #1 anytime soon,” he told Cointelegraph.

The largest exchanges Taotao will face off against in terms of trading volumes “are probably bitFlyer and Liquid,” Raffone confirmed — noting, however, that Taotao’s business model might be different, given that it is backed by a tech juggernaut:

“Its position within the Yahoo Japan’s vast digital ecosystem means it is best suited to support the development of crypto-related services for Yahoo Japan. Therefore, I would say that its closest competitors are Rakuten Wallet and Line Corp’s BitBox, both of which are owned by large tech companies.”

Thus, according to Raffone of Finetiq, Taotao “certainly has a good chance to establish itself as a leading exchange,” however, it will need to be able to leverage Yahoo Japan’s extensive digital footprint and customer base to do so:

“I don’t really see users switching accounts to Taotao from existing exchanges, but Taotao is uniquely positioned to bring new clients to the crypto space from Yahoo Japan’s mainstream businesses.”

Nevertheless, Taotao should also keep in mind that other large players are on the verge of entering the Japanese market. The most notable examples here would be the United States-based Coinbase, which originally planned to establish its operation in Japan within 2018, but is still waiting for the FSA’s approval, and Rakuten Wallet, backed by the eponymous e-commerce giant, which plans to make its market debut this summer.