In mid-March, Bitwise Asset Management issued a damning report on Bitcoin (BTC) trading figures. The San Francisco-based index fund provider declared that up 95 percent of Bitcoin trading volume as seen on CoinMarketCap (CMC) was due to so-called wash trading.

Wash trading is a type of market manipulation where sell and buy orders are simultaneously placed on the same asset to create false and misleading trading activity in the market. Wash trading is illegal in regulated exchange platforms.

As part of its Bitcoin exchange-traded fund (ETF) application to the United States Securities and Exchange Commission (SEC), Bitwise submitted a proposed rule change that included a report on the Bitcoin trading market. According to the report, 95 percent of the recorded BTC trading volume is due to wash trading by bots.

So, where CMC figures would show about $11 billion in daily BTC trading volume, the actual figure less wash trading would be about $470 million. For Bitwise, the problem comes from the fact that CMC and other similar platforms use fake data from obscure cryptocurrency exchange platforms.

The revelations from the Bitwise report on wash trading echo the findings of previous reports released by the Blockchain Transparency Institute (BTI) and Tie — a trading analytics platform. As reported by Cointelegraph, data from 97 exchanges show that 87 percent of cryptocurrency exchange volume was potentially false, according to Tie.

These revelations caused considerable debate among stakeholders in the industry. Critics of platforms like CMC were quick to point out the flaws in CMC’s metrics. Others also ignited the price manipulation debate and the impact of the overwhelming level of wash trading on BTC price discovery.

Is CMC to blame?

CMC is a cryptocurrency market data provider and is among the top-500 visited websites in the world. Trading volume figures on a platform as popular as CMC arguably play a major role in shaping market trading. Thus, there is a palpable concern about the effect of such inflated trading volumes on the market in general.

The data provided by CMC comes directly from exchanges listed on the websites. Some of these platforms domiciled in loosely regulated spheres are reportedly wont to inflate their trading figures to attain a higher position on the CMC ranking of exchange platforms by 24-hour trading volumes.

In an interview with Cointelegraph, Changpeng Zhao (aka CZ), CEO of Binance — one of the largest cryptocurrency exchange platforms in the market — says that CMC isn’t solely to blame. According to Zhao:

“It’s not so much CoinMarketCap’s fault. Everyone tries to blame them, but CMC is a very simple reporting mechanism where every exchange reports their own data to it and they just show it.”

While CZ appears sympathetic toward CMC, others believe the platform is to blame. Ryan Selkis of Messari, another cryptocurrency market data provider, declared via his Twitter handle that CMC’s data is mostly wrong, and this includes market cap, circulating supply and, of course, trading volumes.

Selkis pointed to the supply readings for XLM and XRP as examples of false and misleading data on the CMC platform. For these two cryptocurrencies in particular, the significant treasuries held by institutions with strong affiliations to the tokens help to inflate their market capitalization values, thus earning higher rankings on CMC.

This incorrect data paints an exaggerated picture of the global cryptocurrency market that obscures the real size of the market. Given the sheer proportion of wash trading by bots, the effect of such a reality on the fidelity of the market becomes the next logical inquiry. 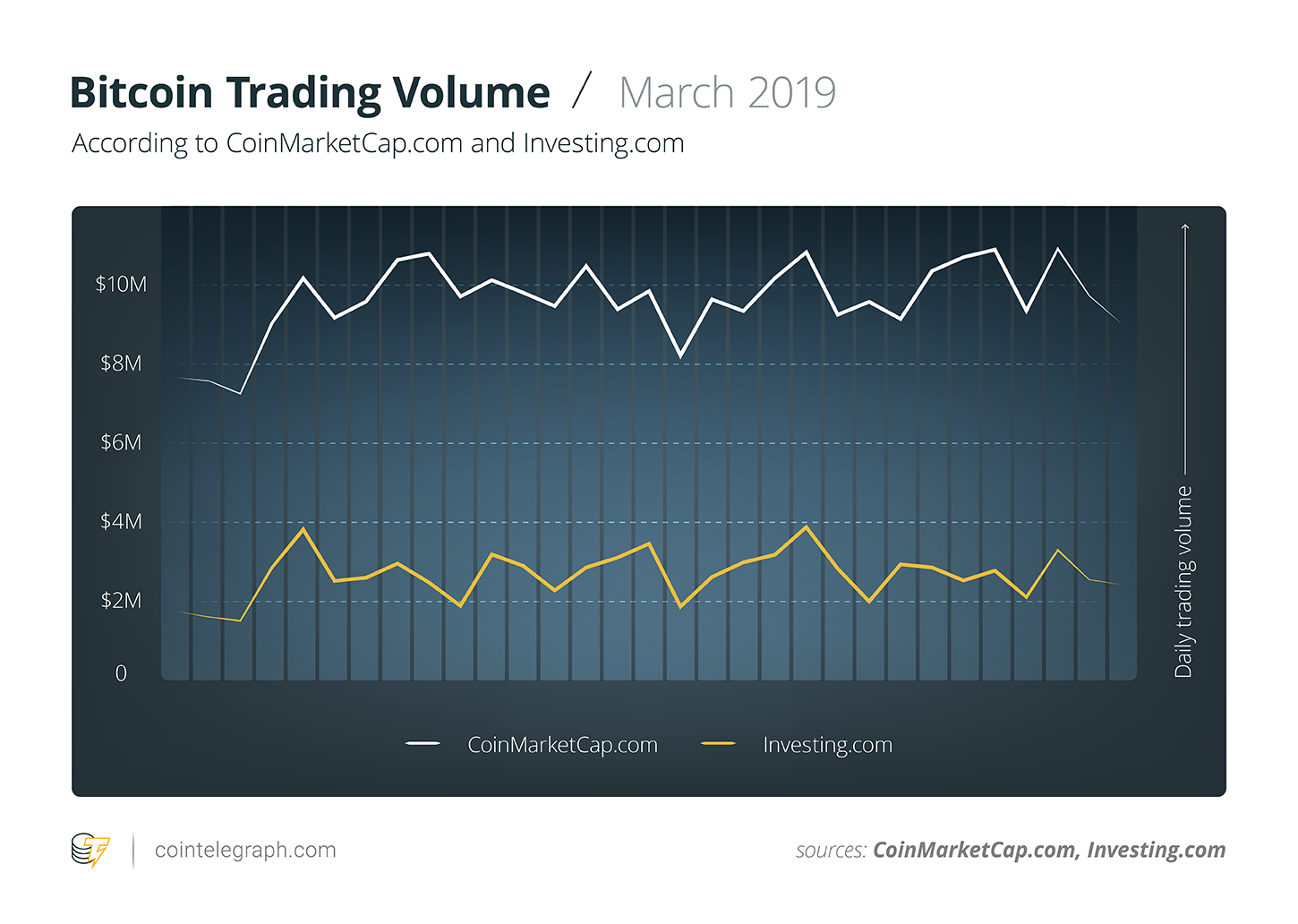 The fear of price manipulation is never far from Bitcoin and the cryptocurrency market as a whole. Back in 2018, the U.S. Commodity Futures Trading Commission (CFTC) began investigating claims of market manipulation in the market.

The U.S. Department of Justice (DOJ) also initiated a separate investigation into the manipulation of BTC and Ethereum (ETH) via wash trading and spoofing. So, then is the ongoing high volume of wash trading significantly impacting the prices of cryptocurrencies?

Commenting on the issue in an email, Joe DiPasquale, CEO of BitBull Capital — a cryptocurrency hedge fund — opined:

“If 95% of CMC’s BTC trading volume is fake, as per the report, it means market activity is being manipulated and the current price is not reflecting true market sentiment. However, as more reputable exchanges enter the space, this effect should diminish, since most of the ‘real’ trading is already taking place on well-known exchanges.”

Mati Greenspan, a senior market analyst at eToro, made the same conclusion in a recent market analysis article, saying on his blog:

“The key here is that all this wash trading that’s been discovered hasn’t actually affected the price of bitcoin itself in any meaningful way. In fact, if we focus only on the real 10 exchanges, we can see that this market is much more robust than previously perceived.”

According to Greenspan’s analysis and the Bitwise report, most of the market liquidity comes from 10 exchanges, even though there are hundreds of such platforms. Nine out of these 10 platforms are regulated, and the price of BTC displayed among them is fairly consistent.

So, if wash trading isn’t having a significant impact on price, why then is the practice this widespread? The answer probably lies in the attempts by these much smaller platforms to gain a larger share of the trading market.

By inflating their figures, they can rise up the CMC rankings. Such a situation gives them the opportunity to attract more users and charge higher listing fees.

How to Identify Fake Trading Volume

Some industry commentators have laid down numerous methodologies that could be used to identify fake trading volumes. Cointelegraph spoke with Joshua Frank, co-founder of Tie, who said comparing website viewership and trading volume was one of the easiest ways of identifying suspicious trading volumes.

According to Frank, the firm’s research showed a major distinction between those two metrics for “reputable platforms” and lesser known exchanges. Many of the exchanges suspected of wash trading routinely show figures like $400,000 in trading volume per view. Meanwhile, on well-known platforms, the figures are closer to $500-$600.

Frank also went on to state that the company decided to make the data available to the public via Google Sheets. The Tie co-founder said more experienced traders can also examine the trading history and order book of exchanges to spot suspicious trading data.

Since most exchange platforms are centralized, it is possible for them to inflate their figures by trading the same cryptocurrencies between a pair of bot accounts repeatedly. This gives rise to false high-volume figures that create the appearance of high liquidity.

In the wake of revelation from Bitwise, several stakeholders have proposed solutions to the fake trading volume problem. For CMC, the first step would be to improve the way it presents market data to users. In an email to Cointelegraph, the company noted:

“In an open ecosystem like the one we are in; we believe that the best policy — one that we follow closely — is to over-provide on data and let users make their own informed choices about what to do with that data.”

Already, Messari has taken steps to display extra information that offers up more insight into the reliability of trading volume figures. The platform included a new column on its website called the “Real 10 Volume.”

This new metric displays the 24-hour trading volume obtained from the 10 cryptocurrency exchanges found not to be involved in wash trading by the Bitwise report. The platform also announced that it would collaborate with these reputable exchanges to further improve the quality of its market data.

Messari’s approach with the “Real 10 Volume” seems to tie in with CMC’s sentiments about over-providing data. It is then left up to the trader to use the different metrics available as gauges for determining what is real and what is fake.

Carylyne Chan, the global marketing chief at CMC, made similar remarks in an interview with Bloomberg, saying:

“For instance, if an exchange with low traffic has $300M volume and just 5 BTC in its wallet, users will be able to draw their own conclusions without the need for us to make arbitrary judgment calls on what is ’good’ or ’bad.’”

For CZ, there is a need for greater transparency in the industry to eliminate such problems. The Binance chief also believes that CMC can use its considerable influence to encourage ethical behavior among listed exchange platforms.

Being a top-500 website on the Alexa rankings, most exchange platforms depend on CMC for referral traffic. CZ states that CMC can impose fines and suspend the listing of platforms that engage in unethical practices. Whether that — and more scrutiny — will be enough to curb the practice remains to be seen.