Sunday, Nov. 18: after a tumultuous week, the crypto markets are today signalling recovery, with most of the top ten cryptocurrencies seeing healthy growth of within a 1 to 7 percent range, and the vast majority of the top 100 crypto assets by market cap in the green, as data from Coin360 shows. 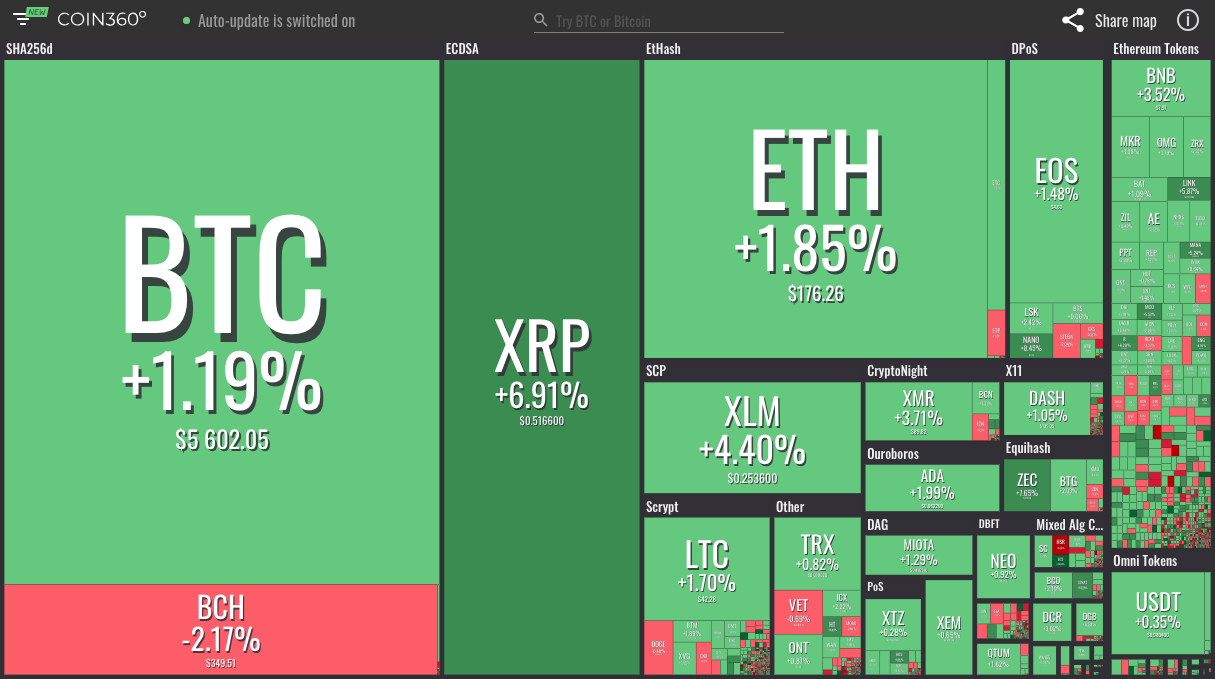 After a steep decline Nov. 14, Bitcoin (BTC) is today showing signs of gentle growth, consolidating its incremental gains in recent days to push the $5,600 price point. As of press time, the leading cryptocurrency is trading at $5,595, up around 0.9 percent on the day, according to CoinMarketCap.

After an brief plummet to $5,371 Nov. 16 — $1.000 dollars lower than its value just two days earlier — Bitcoin has slowly traded sideways and upwards over recent days.

While many have attributed this week’s market tumble to the impact of the contentious Bitcoin Cash (BCH) hard fork Nov.15, some Bloomberg analysts even have gone so far as to forecast that the hard fork fallout, coupled with the “enduring [crypto] bear market,” could mean Bitcoin might tumble as low as $1,500.

Nonetheless, a Twitter poll Nov. 15 from former U.S. Congressman Ron Paul saw the majority of respondents — 50 percent — picking Bitcoin as their preferred “store of value” if they had to invest $10,000 over the next decade in any given asset (the other options being Federal Reserve Notes, gold, or U.S. 10-year treasury bonds).

On the week, Bitcoin is a stark 12 percent in the red; monthly losses are pushing 14.5 percent. 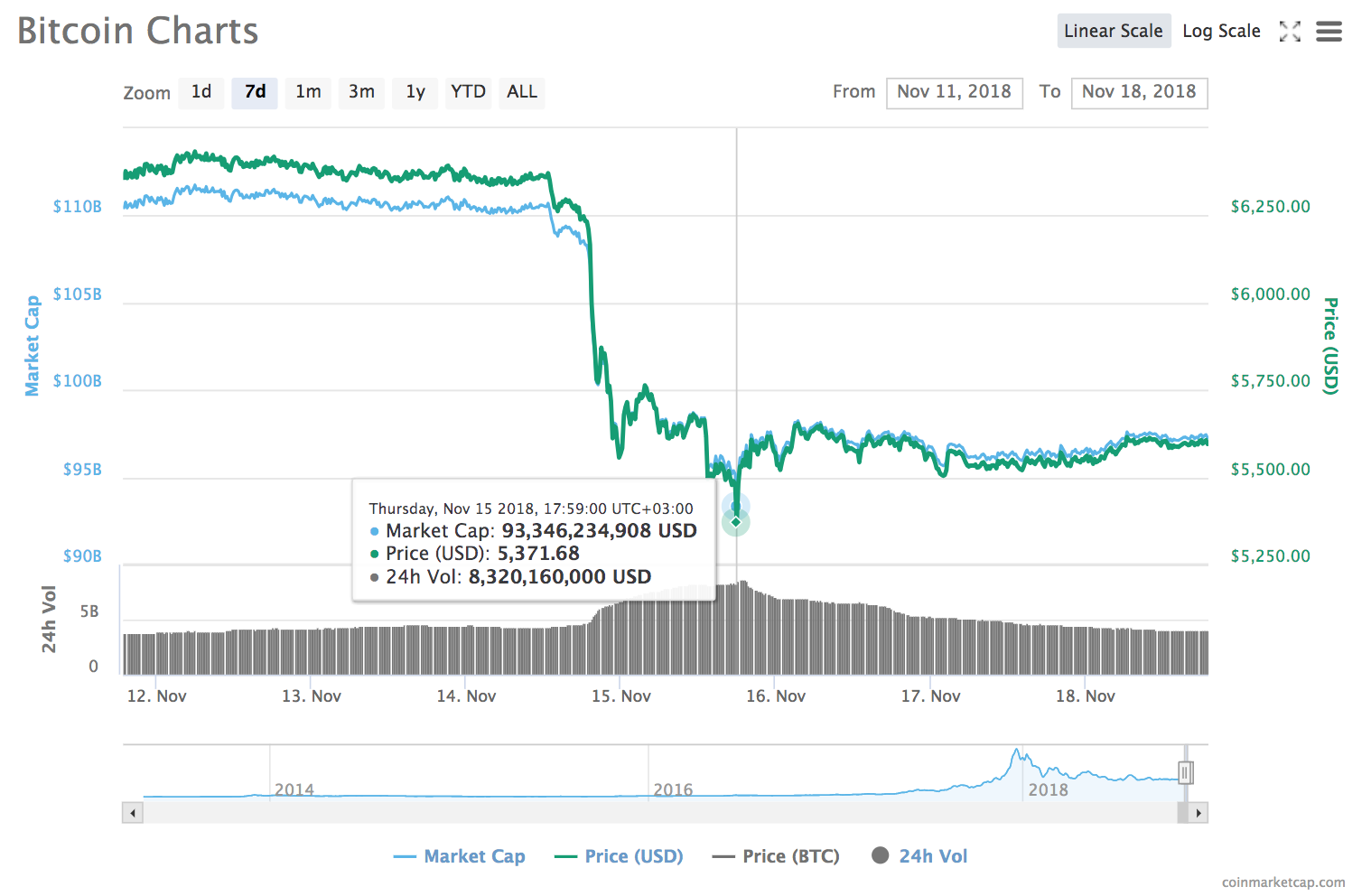 Ripple (XRP) is up 7.3 percent on the day, trading at $0.517 to press time. On Nov.15, Ripple dislodged Ethereum (ETH) again from the latter’s stalwart spot as largest altcoin by market cap.

Today, with a burgeoning market share of $20.8 billion — as compared with Ethereum’s $18.2 billion — the newly-crowned alt is continuing its strong performance, and has now reversed any losses that were incurred during the market-wide fall Nov. 14 (Ripple was valued at $0.511 Nov. 14).

On the week, Ripple is 3.4 percent in the green, with monthly growth at 14.6 percent. 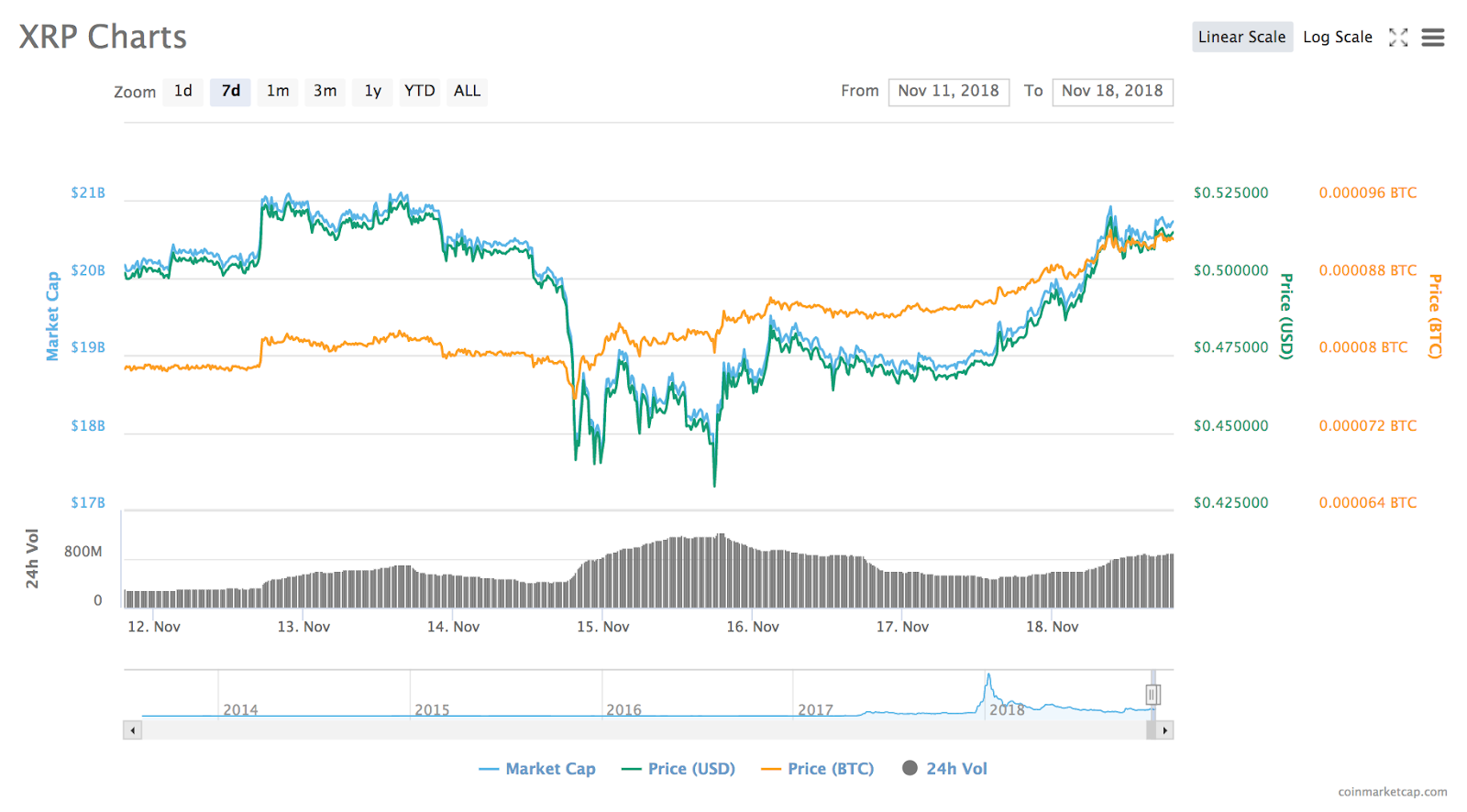 Ethereum (ETH) has seen mild growth and is up 1.3 percent on the day to trade at $175. As of Nov. 14, Ethereum’s losses have been even more drastic than Bitcoin’s, with the altcoin now down over 16 percent on its weekly chart. Having seen more volatility overall on the month, the altcoin’s losses on the month are at 15 percent; Ethereum’s intra-month high was over $221 Nov. 7, with a low of just under $173 Nov. 17. 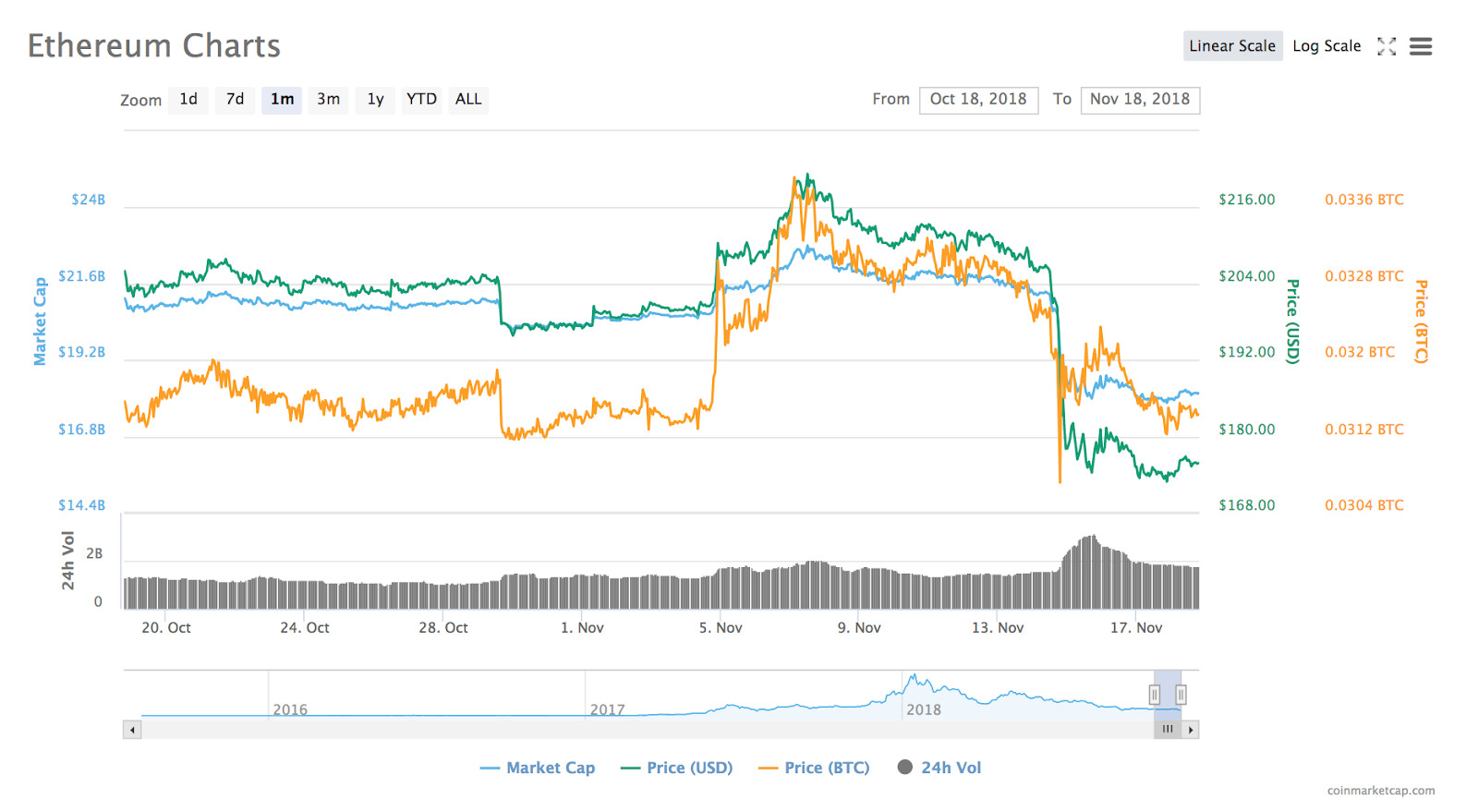 Most of the remaining top ten coins on CoinMarketCap are in the green, seeing growth of within a 1 and 5 percent range.

The notable exception is Bitcoin Cash (BCH), which is down 2.1 percent to trade at $383.2, as the aftermath of its controversial hard fork continue to bear price ramifications.

After Ripple, Stellar (XLM) is the strongest-performing top ten alt, seeing a solid 4.55 percent gain to trade at $0.25 on the day; anonymity-oriented alt Monero (XMR) is also up a strong 3.5 percent at $89.04.

The remaining coins in the top twenty by market cap unanimously green, mostly seeing growth capped within a 3 percent range. The 19th largest crypto — another privacy-focused alt, Zcash (ZEC) —  is seeing above-average growth of 6.2 percent, and is trading at $113.18 at press time.

Total market capitalization of all cryptocurrencies is around $186 billion as of press time, up from an intra-week low at around $175 billion Nov. 15, but almost 12 percent down from $211 billion at the start of its weekly chart. 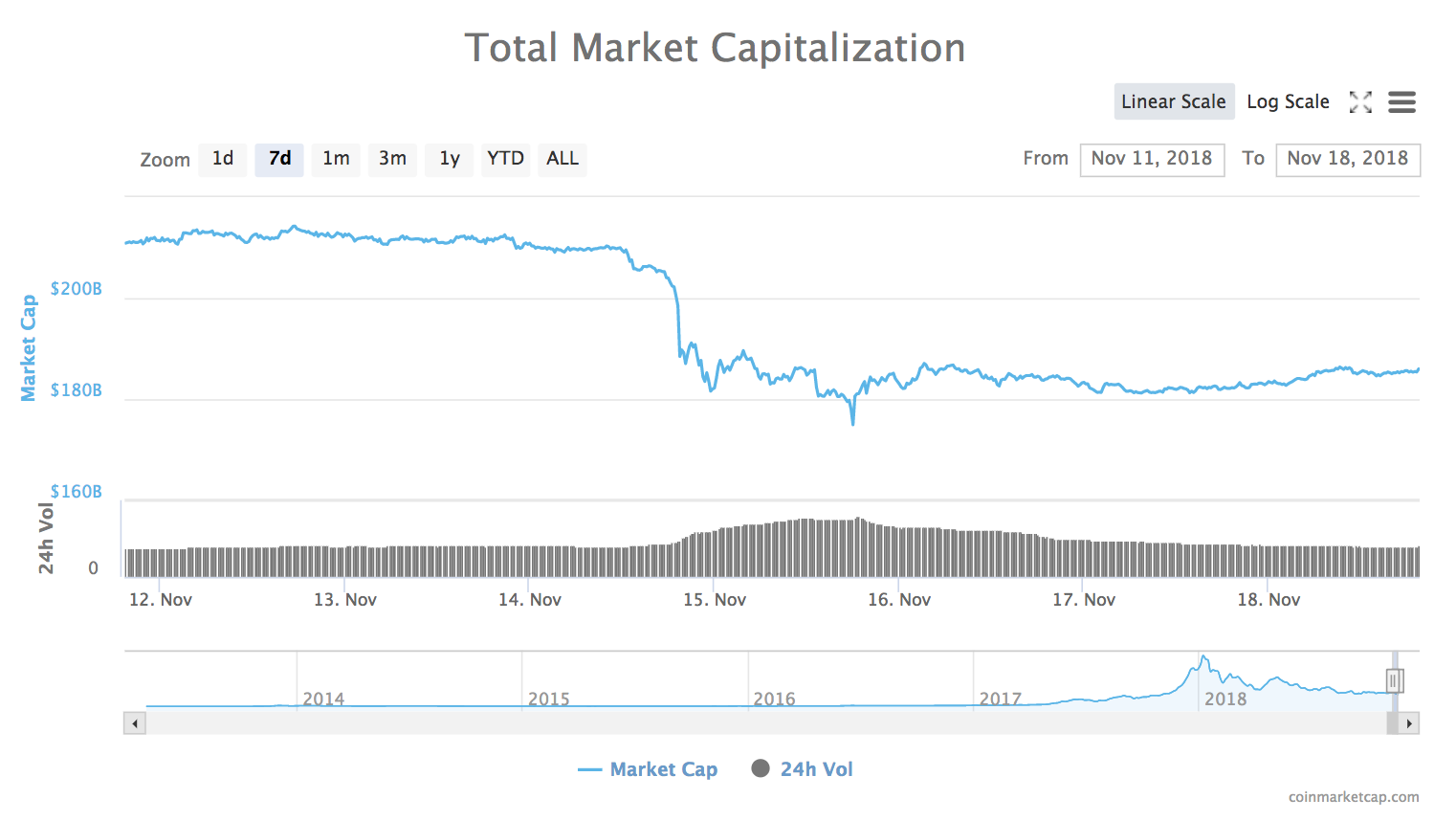 Who Is Winning the Hash War