The latest Bitcoin Cash (BCH) network update has resulted in a complex battle, and the blockchain has been split into two: BCH ABC is in one corner, and BCH SV is in the other.

Here is what they both stand for, and who is currently winning the hash war.

BCH, ABC, SV: Who is fighting and why?

Bitcoin Cash emerged on August 1, 2017 after departing from Bitcoin’s (BTC) original blockchain via a hard fork.

The separation happened in an attempt to manage BTC’s scalability problem. Part of the Bitcoin community, lead by Roger Ver, rallied for increasing Bitcoin’s block size. Specifically, they wanted to see Bitcoin thrive as a transactional currency, not an investment asset, citing Satoshi Nakamoto’s whitepaper and its parts about anonymous transactions. After meeting resistance from the rest of the community, a hard fork turned out to be the only option for BCH to be created.

Twice a year, the BCH network performs hard forks as part of scheduled protocol upgrades. The latest hard fork, scheduled for Nov. 15, was disrupted by a competing proposal that was not compatible with the original roadmap. As a result, BCH community was split into three fractions: Bitcoin ABC, Bitcoin Unlimited, and Bitcoin SV. Cointelegraph has covered the nature of those parties in a separate article. Here is a brief recap:

Bitcoin ABC (Adjustable Blocksize Cap) represents the conservative wing which aims to preserve Bitcoin Cash from radical changes. It is lead by Roger Ver, among others, and has strong supporters represented by Bitmain, as well as major exchanges Binance, Coinbase, and others.

Their wing believes that the basic structure of BCH is “sound,” and “does not need any radical change.” Nevertheless, Bitcoin ABC’s roadmap leaves some room for further development of the network and minimizing transactions costs, which seems to be its main priority.

Bitcoin SV (Satoshi’s Vision), on the other hand, was founded on August 16 — not long before the fateful hard fork — by a blockchain development firm affiliated with Craig Wright, who has previously declared himself as Satoshi Nakamoto. It is supported by niche news outlets like CoinGeek, CalvinAyre and Bitcoin.org.

The reformers attempt to restore “the original Satoshi protocol” by changing the current BCH structure. Specifically, that would involve entirely overwriting the network scripts of Bitcoin ABC and increasing the block size of BCH from 32MB to a maximum of 128MB to increase network capacity and scale.

There is also a neutral wing represented by Bitcoin Unlimited, whose leaders have proposed a compromise solution called “Bitcoin Unlimited’s strategy for the November 2018 hard fork.” Essentially, that proposition suggested the ability to change both Bitcoin ABC and Bitcoin SV, thus empowering miners with their vote during the hard fork.

On November 15, miners backing both implementations started the fork process. As a result, at approximately 1:00 pm EST the first ABC block was found by the mining pool Bitcoin.com at block height 556767. Several minutes later, at 1:22 pm EST, SV miners processed block 556767 on a separate chain. Thus, the BCH blockchain was split into two blockchains, BCH ABC and BCH SV respectively.

To assert BCH ABC’s dominance, its ally Jihan Wu, co-founder of Bitmain, allegedly mobilized some of his mining force. Jihan was quoted as saying:

“I have no intention to start a has war with [Craig Wright], because if I do – by relocating hash power from BTC mining to BCH mining – BTC price will dump below yearly support; it may even breech $5,000. But since [Craig Wright] is relentless, I am all in to fight till death!”

Roger Ver’s mining pool Bitcoin.com also reportedly announced that it will be redirecting hash power from BTC to BCH ABC, albeit only for one day.

In response, Craig Wright of Bitcoin SV argued that only continuous mining would determine the winner. “Continuous competition until one dies as we do not stop,” he announced on Twitter.

According to forl.lol statistics, BCH’s overall hashrate has risen from 9.54 percent to 15.43 percent over November 10 — November 17 period, which covers the major part of the hard fork battle. Consequently, BTC’s hashrate decreased seven percent during those days, falling from 90.46 percent to 84.57 percent. That illustrates that indeed, a considerable amount of mining power had been shifted from BTC to BCH during the peak time of the conflict. That in turn could have affected BTC price, as per Wright’s threatening comment mentioned above, and hence the overall crypto market, which has notoriously slumped last week.

Exchanges start handing over the BCH ticker to BCH

At first, many major crypto exchanges, including Coinbase, Bitstamp, and Poloniex, among others, had halted BCH trading and withdrawals for an unspecified amount of time, waiting for the dust to settle.

However, although Craig Wright has declared the “continuous competition until one dies” and the conflict is technically still ongoing, BCH ABC appears to be the current leader. According to statistics from Bitcoin Cash data aggregator Coin Dance, BCH ABC is two blocks ahead of its rival, BCH SV, as of press time, although the juxtaposition briefly changed in favor of BCH SV at some point. 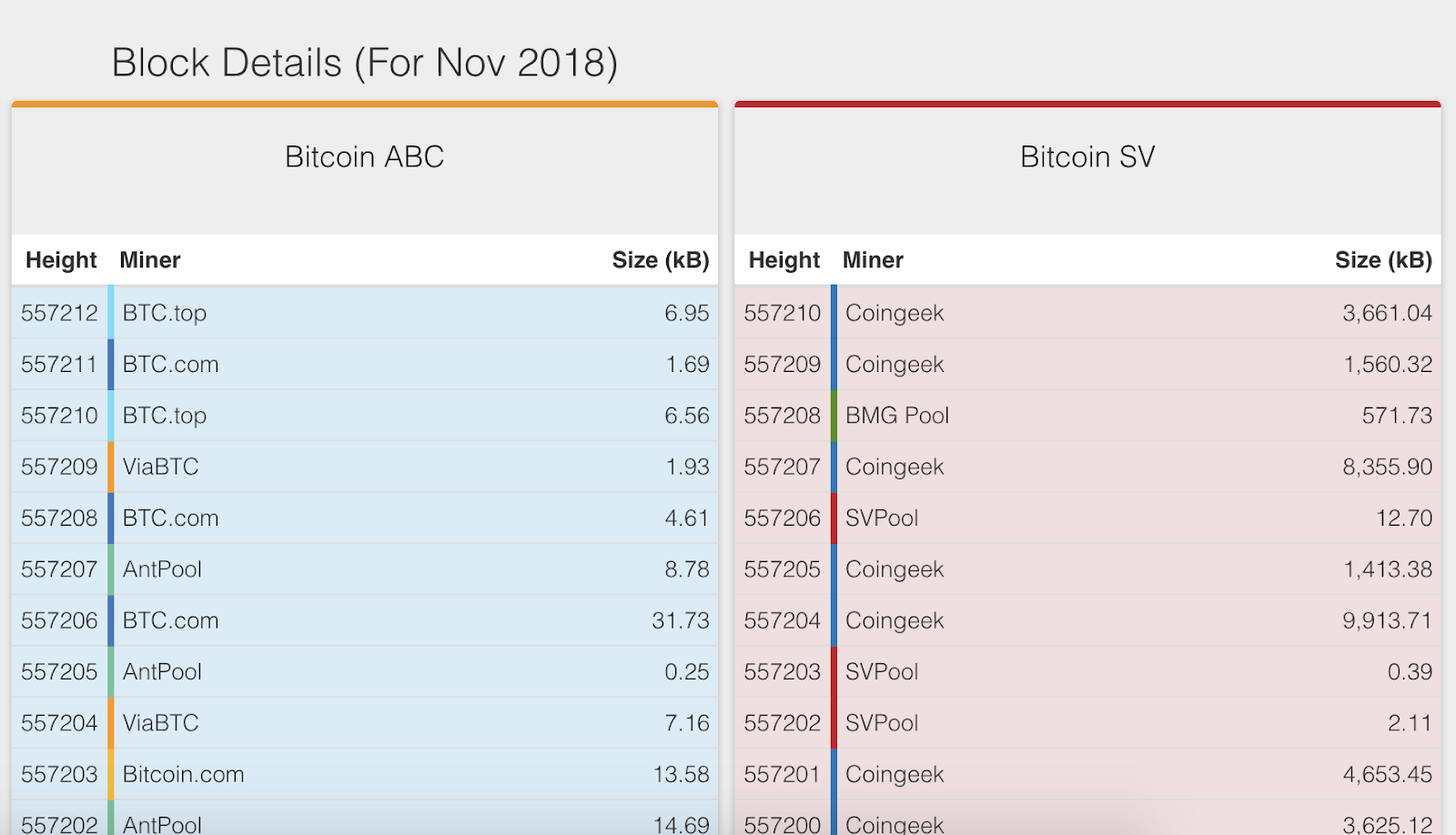 However, more importantly, BCH ABC has accumulated more proof-of-work (PoW) than BCH SV by almost 50 percent, while their respective hashrates are almost identical at this point.

On Nov. 16, Binance exchange broke the silence, having completed the distribution of both Bitcoin Cash ABC (BCHABC) and Bitcoin Cash SV (BCHSV) to its customers on a 1:1 ratio, and opened trading on both pairs. Currently, BCHSV/USDT pair trades at $123.62 there, while BCHABC/USDT is set at $287.

Further, over the next couple of days, over 10 major exchanges have assigned the “BCH” ticker to the BCH ABC rule set, thus appointing the winner in this complex fight. Those exchanges include Bittrex, Kraken, Bitstamp, Coinbase, among others. Some of those services keep trading BCH SV under BCHSV ticker, while CEO of Binance Changpeng Zhao have taken to Twitter to announce that both tickers — BCHABC and BCHSV — “will stay.”

BCH, in turn, has been losing its value since Nov. 7. It trades at $384 as of press time, according to CoinMarketCap.com, being down roughly 30 percent for the past 10 days. Meanwhile, the rest of the market is steadily shaping up for a comeback, as majority of cryptocurrencies are experiencing slight gains as of press time. 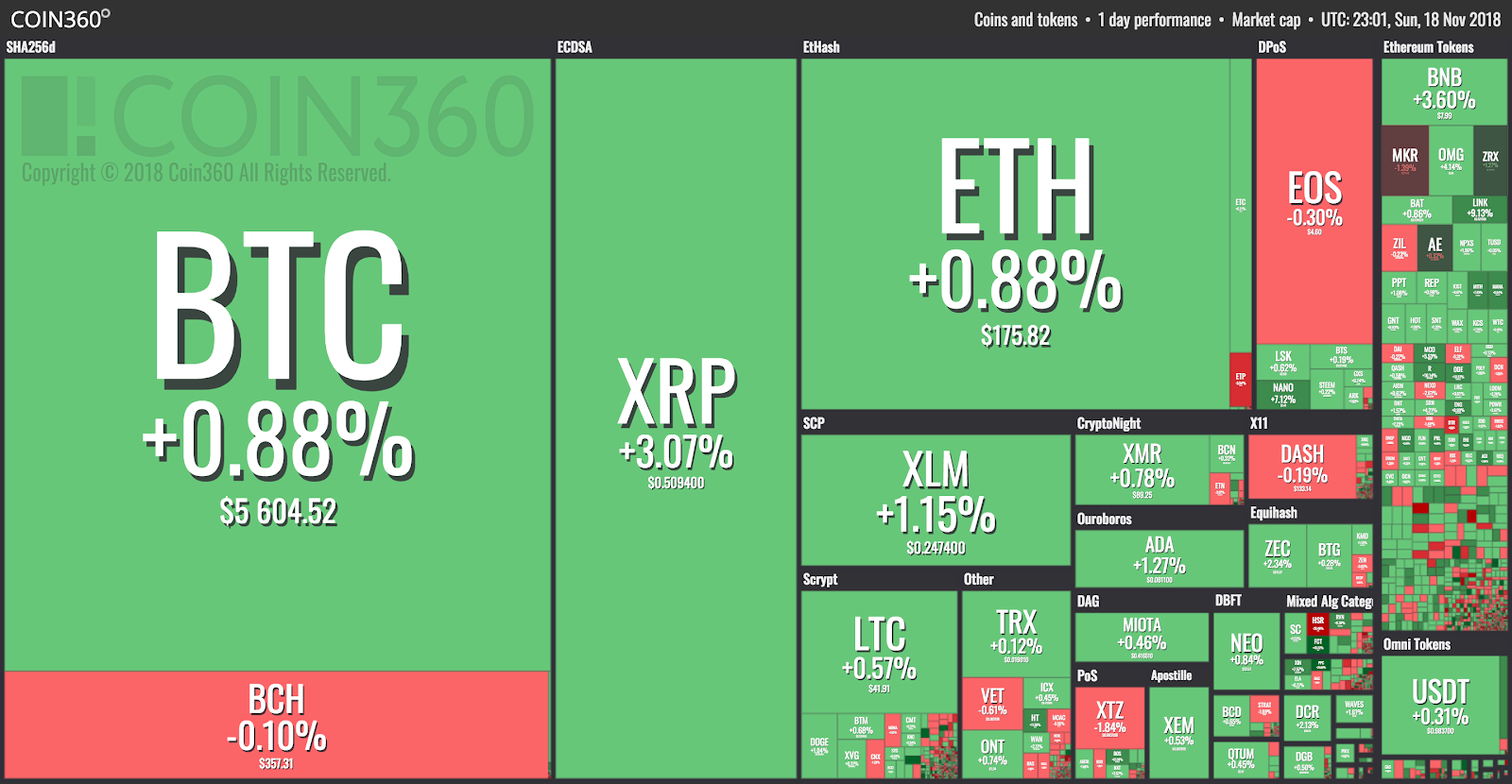