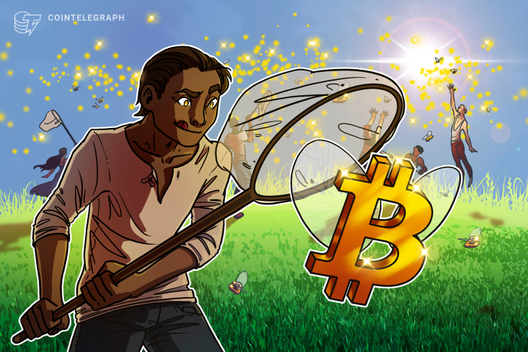 Once seen by the mainstream zeitgeist as a fringe technology destined to languish on the outskirts of society, cryptocurrency today is alluring many leaders of the fintech sector by offering companies the prospect of being at the forefront of the largest financial revolution of the past century.

With mainstream society increasingly accepting Bitcoin (BTC) as a means of payment, financial firms are increasingly seeking to offer a frictionless and convenient means for consumers to make payments using crypto.

On June 26, San Francisco-based mobile payments provider Square announced that users of the company’s Cash App can now receive bitcoin from external wallets. However, Cash App users are restricted from receiving more than $10,000 worth of BTC deposits within a seven day period.

While most Cash App users have been able to purchase or sell Bitcoin since February 2018, a functionality facilitating payments between friends and family has been notably absent, given that such has long-comprised a major value proposition underpinning the app’s fiat utility.

News of the deposit functionality was a poorly kept secret, with crypto Twitter pundit Dennis Parker announcing that Cash App had enabled BTC deposits on June 25, a week following a similar tweet from Marty Bent that also claimed the function was live. Thus, the competition for the crypto payments sector is beginning to heat up.

The integration of deposit functionality reasserts Square as a major contender among the companies seeking to lead the burgeoning crypto payments sector. Revolut, a United Kingdom-based fintech startup, is offering a platform featuring payment processing services, commission-free stock brokerage and foreign currency exchange — and it announced that it had introduced cryptocurrency exchange services to its platform in December 2017. However, users are only able to transfer cryptocurrencies within the Revolut network and cannot receive deposits from external wallets.

On June 20, The Block reported that Bakkt had hired a former Google payments product strategist, Christ Petersen, to assist the company in rolling out an upcoming mobile digital asset wallet application. The app, dubbed Bakkt Pay by anonymous sources, is expected to launch by the end of 2019.

On June 11, a Singapore-based cryptocurrency payments firm, TenX, celebrated its fourth birthday by announcing it had become the first company funded through an initial coin offering (ICO) to receive an e-money license. The license was issued by the Liechtenstein Financial Market Authority, allowing the company to provide “electronic money institution” services across the European Economic Area (EEA). TenX plans to launch its prepaid Visa cards across the EEA during the fourth quarter of 2019.

Square first announced that it was “exploring” allowing Cash App users to purchase or sell BTC  during November 2017 in response to customer demand. The announcement followed a trial of the functionality among select users, with a spokesperson stating:

“We’re always listening to our customers and we’ve found that they are interested in using the Cash App to buy Bitcoin. We’re exploring how Square can make this experience faster and easier, and have rolled out this feature to a small number of Cash App customers.”

During March of this year, Jack Dorsey, the founder of Square and Twitter, revealed that Square was seeking to hire several full-time cryptocurrency engineers and a single designer to work on open-source contributions to the Bitcoin and cryptocurrency as part of an initiative called Square Crypto. Recruits would report directly under Dorsey, with the option to receive remuneration in the form of BTC also available.

In an interview with The Next Web published on June 14, Dorsey discussed the progress of the Square Crypto venture, indicating that regulatory challenges were forcing the company to move slowly in its endeavors pertaining to cryptocurrency.

“An Internet company can launch something and it’s available around the world. Whereas with payments, you have to go to each market and pay attention to regulators. You need a partnership with a local bank. This is a very slow process in any new market.”

On June 11, Coinbase announced that its Visa debit card had been made available to citizens from in Spain, Germany, France, Italy, Ireland and the Netherlands. The announcement also indicated that the company expects to make the Coinbase Card available to more jurisdictions in the coming months.

The Coinbase Card was launched in the U.K. during April 2019. The card’s app makes payments from the balance of a user’s Coinbase account, with Coinbase instantly converting the chosen cryptocurrency into fiat currency upon execution of the payment. Transactions incur a fee of 2.49% within European countries, however, using the card outside of Europe currently draws a 5.49% fee. U.K.-based payment processor PaySafe is the issuer of Coinbase’s cards.

According to unverifiable reports from May, Coinbase had entered into “advanced talks” to purchase pioneering cryptocurrency custody provider Xapo for approximately $50 million plus an earn-out. Xapo is estimated to hold more than $5.5 billion in assets under custody, with the company also offering an app that allows users to send BTC and fiat currencies to other Xapo users without incurring fees as well as facilitates payments to banks accounts in more than 30 countries. The report noted that Fidelity Digital Assets had also shown strong interest in purchasing Xapo.

On June 13, Circle announced that it will start winding down support for the company’s payment app during July, after five years of operations. At the time of the announcement, Circle Pay supported fee-free payments denominated in U.S. dollars, British pounds and euros, and was available to customers from the U.S., the U.K. and 27 other European countries.

The company attributed the decision to sunset the app to the emergence of stablecoins such as Circle’s USD Coin (USDC), describing fiat tokens as superior means of frictionlessly transferring fiat value between entities. By contrast, the company stated that Circle Pay “largely relied on interfacing with the traditional financial system and untokenized fiat currencies.”

The announcement was published one month after Circle laid off 30 staff members, who then comprised 10% of its entire workforce. Circle’s CEO, Jeremy Allaire, attributed the downsizing to a response to market conditions and regulatory hurdles in the U.S.

The partnership will see BitMart users able to make payments using Paxful without being charged listing fees, while Paxful users will be provided the option to convert BTC into alternative cryptocurrencies using BitMart’s exchange. Both companies expect that the agreement will bolster liquidity on their respective exchange platforms.

At the time, Ray Youssef, the CEO and co-founder of Paxful, stated: “We’re excited to integrate with BitMart in efforts to bring more trading options to emerging markets. It has always been our mission to provide financial freedom worldwide and we see this as the next big step in the financial revolution.”

The founder and CEO of BitMart, Sheldon Xia, emphasized that the partnership will significantly expand the number of ways by which the exchange’s users can purchase BTC, stating:

“With this partnership, investors will now have direct access to multiple payment approaches including bank transfers, gift cards, debit/credit cards, and cash deposits, lowering the barriers to entry for new adopters of digital currency investment.”

BitMart currently has a user base of more than 600,000 and a reported 24-hour volume of approximately $1.18 billion, while Paxful has hosted approximately $20 million worth of bitcoin trades on a weekly basis for the last 12 months.

While the proliferation of cryptocurrency payment platforms is undoubtedly pushing the ecosystem toward mainstream adoption, popular payment apps could prove to be a centralizing force upon the crypto community as a handful of major companies compete for consumer loyalty.

However, the increasing presence of large financial corporations within the cryptocurrency economy may create pressure on lawmakers to provide clear guidelines pertaining to crypto, with the prevalence of an unclear or exclusionary regulatory apparatus comprising the primary barrier to a rapid and global expansion of the cryptocurrency payments industry.

Crypto Exchanges Must Register With Financial Watchdog Next June