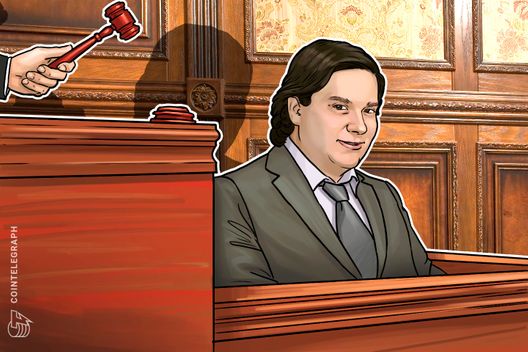 Mark Karpeles — the former CEO of the now-defunct Bitcoin (BTC) exchange Mt. Gox — has received a suspended jail sentence after being found guilty of tampering with financial records. The news was reported by Bloomberg on March 15.

The Tokyo District Court has reportedly found Karpeles guilty of mixing his personal finances with those of the exchange in order to conceal the platform’s losses to hackers. He received a two and a half years jail sentence, which he will not have to serve unless he commits another offence within four years.

The court however acquitted Karpeles of alleged embezzlement stating that:

“The charge of electronic record tampering is true and deserves punishment, but there’s no criminal evidence of embezzlement.”

While the fraud and embezzlement charges were not related directly to the theft, Karpeles’ conduct in the wake of the platform’s hack has sparked suspicion. In summer 2015, just before the charges were brought against him, Karpeles purportedly found 200,000 of the missing BTC in a cold storage.

Bloomberg cites the court as stating that it could not “look lightly upon the criminal responsibility of the defendant,” accusing Karpeles of causing “massive harm to the trust of his users”:

“[T]here is no excuse for the defendant, who is an engineer with expert knowledge, to abuse his status and authority to perform clever criminal acts.”

Since his trial commenced in July 2017, Karpeles continues to maintain his innocence and has accused the Japanese justice system — which, as Bloomberg notes, has a 99 percent conviction rate — of unfair treatment. He claims to have been interrogated for months without access to legal representation and “bullied” into signing a confession.

As reported, earlier this month a United States court denied Karpeles’ motion to stay a separate lawsuit, which accuses him of personal liability for investors’ losses, in light of rehabilitation proceedings in Japan.

In February, Karpeles dismissed the so-called “GoxRising” movement, spearheaded by controversial crypto figure Brock Pierce, who has claimed he can reboot the trading platform and accelerate compensation for Mr. Gox’s creditors.