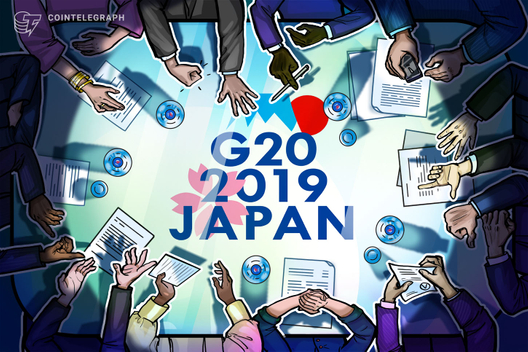 One of the main themes to be discussed at the G-20 Financial Ministers and Central Governors Meeting this weekend has to do with money laundering and cryptocurrency. What kind of agreement would be a surprise? Even for the purpose of introducing Anti-Money Laundering (AML), should we allow our financial privacy to be compromised? Alexander Zaidelson, the CEO of Beam, shared his views with Cointelegraph.

A new agreement on crypto and AML?

Jiji Press, a major Japanese publication, recently reported that there will be “a new kind of agreement as to cryptocurrency and AML/CFT.“ But for blockchain analysis firm Chainalysis, which has “engaged directly with global regulators,”  it is surprising if they agree on something new. Jesse Spiro, head of policy at Chainalysis, expects Financial Action Task Force (FATF) guidance, which will be published later this month, to reflect the draft guidance that they issued in March this year.

“It would surprise us if FATF substantially modified the pre-existing draft in any major substantive way.”

He summarized the FATF draft as an agreement in the industry that “certain standards, including proper Know Your Customer (KYC), enhanced due diligence (EDD), transaction monitoring, and suspicious activity reporting are necessary to combat money laundering”

The Financial Action Task Force (FATF) is an intergovernmental body formed to fight money laundering and combat the financing of terrorism. In a previous G-20 meeting, the G-20 said that they would “commit to implement the FATF standards as they apply to crypto-assets.”

The Japan Virtual Currency Exchange Association (JVCEA) refrained from predicting the outcome of the G-20 summit but told Cointelegraph that it would be ready for compliance:

“We are watching global movements as to AML/CFT very closely. We supervise our members, Japanese crypto exchanges to make sure that they comply with them.”

According to Alexander Zaidelson, the CEO of a privacy coin-centered Beam, the governments “may eventually strengthen the regulatory scrutiny to on- and off-ramps, i.e. places where cryptocurrency can be converted into Fiat currency, mostly exchanges” He also added that there also may be an “attack” on unregulated exchanges.

Beam is known as a privacy coin that adopts a protocol called MimbleWimble, which seeks to improve both privacy and scalability at the same time. When asked if he is concerned that the G-20 might somehow ban anonymous coins, Zaidelson answered:

“I don’t think it is possible to ban anonymous coins, and the regulators understand it.”

“I think that a balance should be found between privacy and compliance, where people can choose the level of compliance that works for them. It is similar to how cash works today – private people do not need to report cash transactions, but businesses do.”

Although it is possible that the regulators could make it difficult to convert fully anonymous coins to fiat, Zaidelson argues that privacy coins’ opt-in compliance can deal with that case.

“I think that privacy is a basic human right,” according to Zaidelson, which he thinks is something to keep in mind when talking about money laundering. For him, it is not acceptable if the regulators have all financial transactions available for review at any given moment:

“It is not possible to check every PC and every mobile phone for the presence of a crypto wallet. It is not possible to block the Internet. Instead of engaging in a futile fight against anonymous cryptocurrency, the regulators should work together with the developers and find ways to make them a part of the existing ecosystem.”

Spiro of Chainalysis thinks of the balance between money laundering and privacy in terms of “public interest and safety.” He went on to say:

“For example, the European GDPR laws, which were enacted to protect privacy, have clear rules that outline when the transmission of personal data warranted, including if it is ‘in the public interest,’ or necessary to protect the public.”

Spiro thinks a similar criterion should be applied to cryptocurrency. He sees the merits of “cryptocurrency compliance best practices like KYC and blockchain analysis” in “detecting and preventing illicit activities such as child exploitation, human trafficking, narcotics trafficking, and terrorism.”

At the same time, he makes sure that Chainalysis does not collect any personally identifiable information from exchanges. What they can do instead is know “a particular address belongs to a customer at that exchange, not who the customer is”