But with the industry evolving further in the last few years, gaps between mature projects and less developed ones are more noticeable, exhibited by issues that a well-funded or more thorough team of development experts could avoid. The latest example of this came from EOS — a competitor with Ethereum — when a user figured out how to broadcast a fake transaction to the network for 1 trillion EOS (a single transfer for $3.6 trillion).

While the incident was entirely harmless, it cast doubts on the sanctity of a platform that’s meant to oust Ethereum from its position as the de facto decentralized computer. Using an exploit in an EOS idea called deferred transactions, the user set up a payment that would be settled at a later date — and it was published to the network, even though it was 1,000 times as large as the EOS market cap itself.

EOS block producers EOS New York noted that the transaction that created the deferred incident can only determine whether the create request was submitted or whether it failed, thus getting around the limitations. Once that happened, “it is subject to normal validity checks.” These events cast the upstart “Ethereum-killer” in a less-than-positive light, but they do create an opportunity for an updated, in-depth look into this promising platform.

EOS is an auspicious blockchain project and remains a top market contender, vying for fifth on the list of top market capitalizations at any given moment. It began as a competitor to Ethereum in 2017, arriving as that solution began demonstrating issues with scaling and transaction speed. EOS had similar ideas: decentralized storage, bandwidth and incentives. In turn, EOS announced its intention to create a similar idea to Ethereum but with a different consensus, mining and other foundational concepts that would solve Ethereum’s transactional bottlenecks. 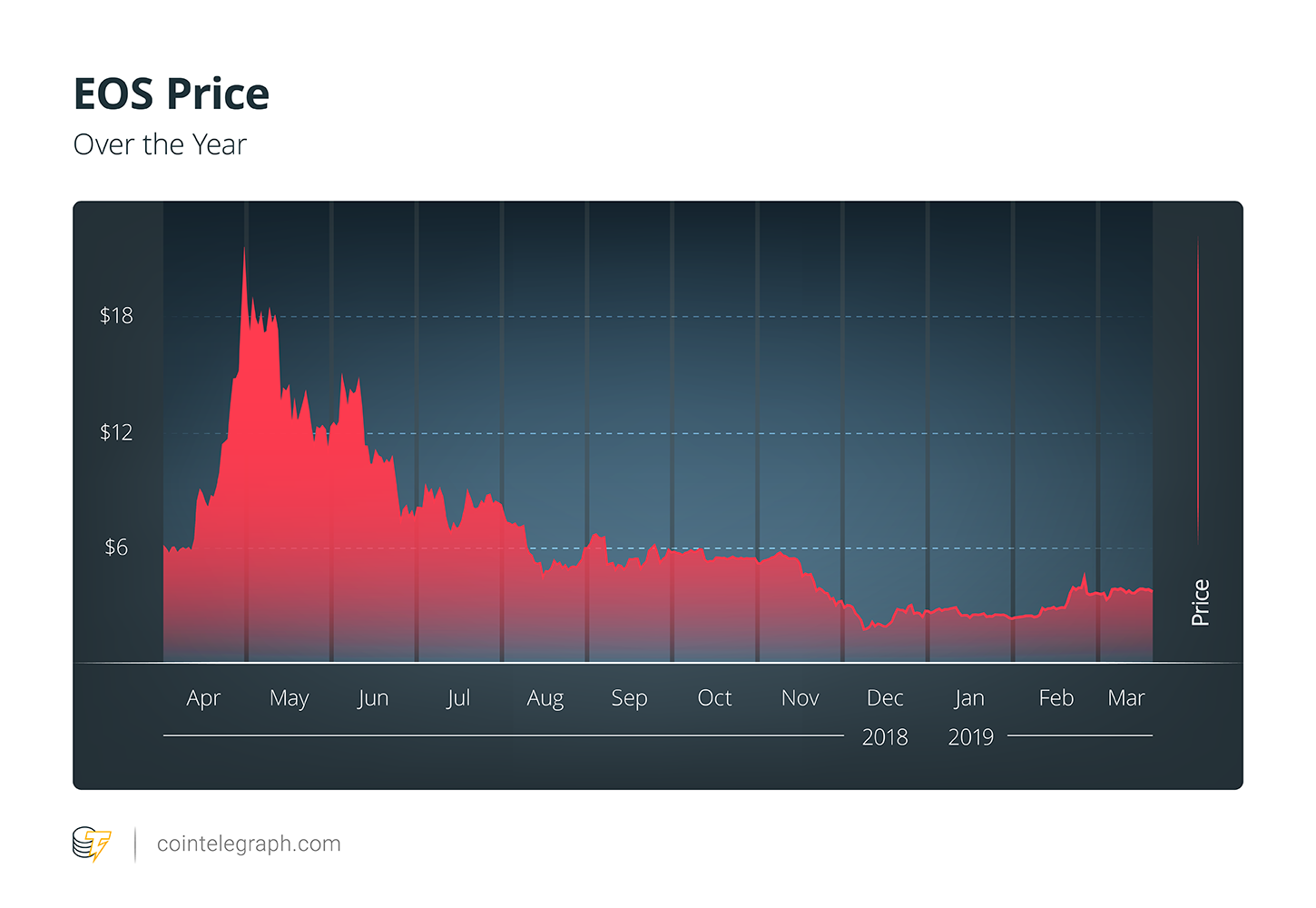 The initial coin offering (ICO) for EOS was astoundingly successful, thanks to its ambitious timeline, outlook and circumstantial trends. It garnered over $4 billion worth of ETH, setting records but, at the same time, demonstrating the inflated the value of most cryptos and the sector’s unsustainable optimism.

EOS’s founding team, Block.one, accordingly owned one of the fattest ETH wallets, using it it to push EOS through several releases and upgrades, sponsor international partnerships, launch a bug-bounty program, and deliver a working mainnet. The latest release, EOS 1.6, released in January 2019, brought with it upgrades including enhanced tools for smart contract development and faster remote data processing.

DApps on EOS are plentiful, and many of the most-used DApps are from EOS rather than competitors like Tron and Ethereum. While games such as BetHash and PokerEOS find audiences, blockchain development companies like LiquidApps use EOS as their permanent sandbox — and not only make working with it more fluid, but have also released new platforms like vRAM, which is a decentralized, Video RAM storage solution that is much more efficient than any alternatives.

However, various successes of the EOS platform aren’t substantial enough to hide its flaws. LiquidApps CEO and co-founder Beni Hakak notes about EOS that “blockchains today don’t yet scale. EOS […] which has solved many issues on the transaction speed side, still has resource limitations which are critical for the extensive dApp developer that is so needed for user adoption.”

Though several DApps have been deployed, the platform has been found lacking in many ways in 2019 alone, and the circumstances of its existence beg serious questions about the blockchain fundraising model and the ability of other firms to produce innovations reliably.

Peter Todd, who has expressed bearish views on EOS at times, claims that the platform’s problems are features rather than bugs. Speaking of EOS’ scalability, Todd notes that “it was more likely than not deliberately designed to be terrible,” so that it would make it difficult to access the validator set, due to its permissioned nature. The result is less competition and an unscalable platform.

The bug bounty program launched by EOS came in handy this year, though its effectiveness had the secondary consequence of revealing just how fickle the platform remains. A Chinese cybersecurity firm found a false top-up vulnerability that would allow hackers to deposit EOS tokens into certain exchanges and wallets without actually transferring them. Several buffer overflow vulnerabilities were also found in EOS repositories, and the company has already paid in excess of $50,000 to white-hat hackers in the first three months of 2019.

EOS is also one of the primary projects used as an example of counterproductivity and paradoxical ideas in the blockchain fundraising sphere. With well over $4 billion in ETH in the mid-2017 bull market, the then-tiny project was worth more than many multinational corporations — and all without a real product.

Furthermore, companies that fund themselves with cryptocurrency are stuck with volatile balance sheets by the nature of their ICO, and must therefore sell to have more fungible and predictable working capital. This has raised questions about how funded blockchain projects represent a liability for the value of their blockchain’s underlying currency, with EOS one of the stronger sell pressures as the market receded in the year following its launch.

Though, according to Ethereum blockchain explorers, it had sold 2.5 million ETH by June 2018, the still-massive valuation of EOS doesn’t mean it’s any more successful than Ethereum. In fact, Ethereum’s volunteer developer community has arguably done more to make it a reliable user experience, without a centralized authority. EOS is criticized for its centralization, but some of the project’s advocates argue that it’s less of an issue than people think. According to renowned investor Mike Novogratz, CEO of Galaxy Digital, “EOS’ critics say it’s not decentralized enough, and that’s a very fair debate,” though he believes that “there will be markets for many different blockchains.”

EOS is still finding potentially groundbreaking errors despite a huge pool of funding to draw from, plus the resources of an organized company able to make policy decisions immediately rather than relying on the consensus of peers.

Throughout its short lifespan, EOS has made a strong example of the pitfalls of centralized ICO fundraising. One of the biggest is that the SEC now defines projects like EOS more strictly and sees ICOs for these projects as issuing a security. By nature of its concentrated foundation, EOS and similar platforms must grapple not only with retroactive regular compliance, but also the fluctuating value of their working capital. Fully decentralized ideas without an official raise of funds — like Ethereum — encounter none of these obstacles because progress isn’t impacted by price and it has escaped new SEC classifications.

The largest boon for any decentralized idea is therefore not the amount of money it raised, nor the promises it made, but its ability to inspire peer-to-peer participation. People like to feel that they’re a foundational part of a new paradigm, and if the enthusiasm is not organic, enthusiasm for the project can wane. For projects that put investors on equal footing with developers and forego the executive board, failures are also a community problem to be solved rather than an injustice. When casual network peers can take roles of authority if they choose, and volunteer developers are responsible for fixing bugs, this community feeling of “mutually assured success” outweighs the momentum of a fat ICO wallet 10 times out of 10, and this is a lesson EOS is still learning.

Did the SEC Chairman Confirm Ethereum Isn’t a Security? Not Quite, but It’s Optimistic