Last month, Facebook rocked the world with its blockbuster Libra announcement. Even a year ago, the idea that an iconic United States company would launch a digital currency or that a sitting president would tweet about it seemed insane.

Welcome to the new normal.

The Libra announcement sent politicians scrambling, hit the mainstream media like a hurricane, and left many crypto influencers wondering if the social network giant just turned 90% of altcoins worthless. What tiny crypto project with a few dozen programmers can stand against the combined might of not just Facebook but also the titans of the tech and payment processing world, such as Uber, Lyft, Paypal, Visa and Mastercard?

But there’s a new hope on the horizon. One company on the planet has the power to take on the social media monster and win: Telegram.

If Libra is the Empire Strikes Back, Telegram is A New Hope

While Facebook has the unwashed masses who’ve never held a Bitcoin, Telegram has the entire crypto community that lives and breathes altcoins for breakfast.

While Mark Zuckerberg is the poster child for the internet as a surveillance economy, Pavel Durov, the founder of Telegram, is a fight-the-power renegade, with digital privacy being a focus throughout his career.

While Zuckerburg looks like someone doing a bad impression of Data from Star Trek, Durov looks like he just stepped off the stage of Magic Mike.

If you’re a pioneering member of the crypto community, you might have looked with scorn on the Telegram fundraiser, which beat the initial coin offering regulatory backlash by raising all of its money from private accredited investors, rather than crowdsourcing it from the people. Maybe you only read the short Telegram white paper that looks and reads more like slick marketing than a detailed deep dive?

You should take a closer look. 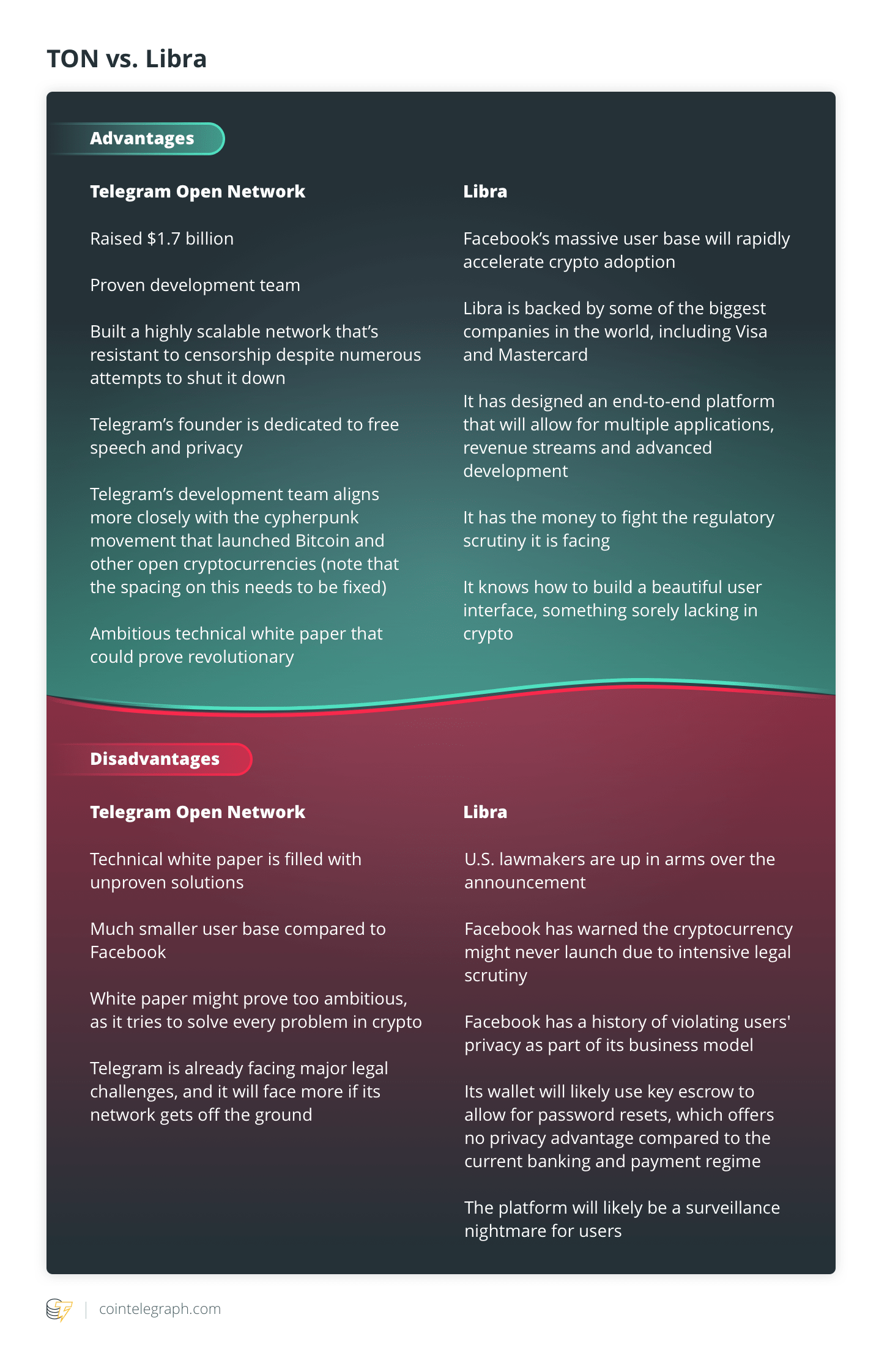 The more you look, the more you realize there’s a lot to root for if you’re longing for a legitimate top contender to take on Libra — i.e., the nightmare of cyberpunks.

The man built two successful companies, including VKontakte (aka VK), a Facebook-equivalent that is especially popular in Russia, and he followed that up with Telegram. That means he knows how to build real, working, scalable platforms when most crypto projects can’t even get their testnets off the ground. He’s also an antihero and iconoclast with a philosophy of radical individualism and self-sovereignty that matches the cypherpunk ethos that launched Bitcoin and a thousand other crypto ships.

Even better, he backs that philosophy up with action.

Currently, Facebook faces a $5 billion fine from the Federal Trade Commission for protecting users’ data the way the mob “protects” small businesses. Durov, on the other hand, refused to create a backdoor to Telegram when the Russian Supreme Court demanded it — and even as American companies like Apple, which normally stand tough on privacy, caved and yanked Telegram from the app store. While Zuckerberg built his company on surveillance as a business model, Durov built his company on privacy.

If you only skimmed the brief white paper for TON, you might have missed that Durov isn’t alone. He’s backed by a bevy of math geniuses and hardcore programmers, who started coding in diapers and won strings of gold medals at the International Math Olympiad while you were watching Saturday morning cartoons. One of those folks is Pavel’s brother Nikolai Durov, chief technology officer of Telegram, who solved cubic equations at the age of eight, started coding at nine and wrote his first operating system at 13 — in assembly language.

Nikolai Durov also wrote the much longer and more comprehensive technical white paper, which weighs in at a whopping 132 pages. It’s a dense, complex and ambitious outline for the new Telegram Open Network (TON) platform. However, some have bashed it as a fantasy for promising a sci-fi utopia that solves every single problem in crypto.

It’s not the first time Telegram faced criticism for its architectural choices, with Gizmodo’s William Turton once writing an article with the headline “Why You Should Stop Using Telegram Right Now.” The article hits Telegram hard for choosing client-server encryption instead of end-to-end encryption by default. Even though Telegram defends its choice of architecture, as it gives people the best of both worlds with the choice of secret chats, the criticism continues to dog the company to this day.

Some redditors even panned the white paper as nothing but a bunch of buzzwords and hand-waving.

But read through it closely and you’ll realize that, if Telegram pulls off even a quarter of what is  proposed, it could prove revolutionary.

If it works, TON will solve the issues surrounding scaling, storage and decentralized identity as well as protect the platform against constant assault from hostile powers. Yes, the paper is a grab bag of ideas — some of them unique and some taking inspiration from a wide spectrum of sources — but building on other people’s good ideas isn’t a bad thing, it’s a virtue.

It’s only a problem for people suffering from not-invented-here syndrome, a debilitating mental disease that makes people think they have all the answers and that nobody else has any idea worth doing.

While Libra’s white paper frequently drops the term Blockchain — a total of 40 times in the 26-page text — apparently in an attempt to stretch its meaning far enough so that a “cryptographically authenticated database” can also be called one,  the TON team knows the difference between a blockchain and a hole in the wall. It is looking to deliver a massively sharded and scalable system that sends and receives not only money, but encrypted messages and a killer sticker collection that makes the emojis from WhatsApp’s messenger look like ASCII art. It wants to do all that while enabling robust peer-to-peer encrypted storage for your important documents and even allows for decentralized virtual private networks.

While Facebook soaks up the punishment and pressure from hysterical governments and politicians who say with a straight face that they’re worried that Libra’s wallet — which is compliant with Know Your Customer and Anti-Money Laundering laws — can be used for “terrorism,” Telegram’s team wisely stays out of the spotlight, just like Satoshi Nakamoto did with Bitcoin. If you want to build a platform in peace, it is better to do your work in private and not draw the attention of publicity-seeking politicians trying to get reelected in battleground states.

Governments love cutting off the head of the snake. If you don’t give them a head to cut off, then they don’t know where to strike.

But even with all that going for them, does Telegram have the power to build a true platform for e-commerce and the decentralized applications of tomorrow? Can it stand against the titanic forces behind Facebook’s nascent digital currency and the masters of the e-commerce universe backing it?

That is the trillion dollar question, as the platforms that win the day might end up controlling a massive chunk of the world economy and could make or break nations, companies and people. With so much at stake, it’s going to be a war.

The Man in the Arena

To win, it will take a hero.

The might of the world’s old-guard is nearly absolute. Nation states print money, and printing money is the power of God.

To break the stranglehold, you need to build a perfect platform: one that’s easy to use, scales massively and is impossible to bring down — a Hydra with a thousand regenerating heads. It must have all the features of the old financial system and new ones that nobody can resist. It’s got to bring in people and businesses with ease so that it grows too big to fail.

The age of surveillance capitalism is upon us, and it’s growing stronger every day. It’s a dragon that’s eaten the world.

If there’s anything that can bring that dragon crashing from the skies, the early odds go to Telegram.

While Libra can and will leverage Facebook’s 1.7 billion users to rapidly accelerate adoption, Telegram’s user base of over 200 million people is a growing force in its own right.

And even with fewer users, Telegram has one major advantage: Most Facebook users wouldn’t know a Bitcoin from a casino chip. On the other hand, Telegram is well known for its vibrant, technically savvy community — including most of the world’s crypto-faithful, who host their user groups and do their day-to-day business there.

That means if TON drops a bunch of coins in its Telegram-attached wallet, a bigger percentage of those users will probably know how to spend, save and send that money, while Facebook’s users might start ringing the support lines, wondering how to reset the password on their private key.

That’s not to say Telegram’s team is perfect by any means. It has faced intense criticism for a hand-waving white paper that promises much without telling people exactly how it will work. Beyond that, there has mostly been radio silence from the team since its mega ICO. There is a private beta, but it’s closed to the wider public for now. In the end, the project might prove too ambitious even for a talented team with a lot of capital on hand.

The company is also running out of time to deliver. If its team is going to succeed, it needs to step up now. The stakes have never been higher. People willingly sacrifice privacy for convenience without a second thought. The original crypto dream of self-sovereignty is slowing warping into a terrifying Black Mirror episode, in which blockchains don’t enable privacy but rather ubiquitous surveillance on an unprecedented scale. Blockchain analytic tools peer deeply into transactions, and the SEC is looking for teams and tools dedicated to blockchain analysis. Facebook will happily give third parties that convenience and a two-way mirror into all of our lives.

Telegram might not be the hero we expected — or even the one we wanted — but it may be our last, best hope for a future that doesn’t turn into a dystopian nightmare of panopticoins.

The crypto revolution started idealistically with a twinkle in Satoshi’s eye. There’s always a certain naivety in revolutions. You have to be crazy to take on entrenched adversaries. The kings of the world have the money, the guns and the legal hammers, and they’re willing to use them at all costs to keep a firm grip on the royal scepter.

But some revolutions find a way..

Daniel Jeffries is an author, futurist and thinker. He’s written four science fiction novels, and he wrote his first story about Bitcoin in 2014 for Bitcoin Magazine, when a young writer named Vitalik Buterin was planning a little idea called Ethereum on the writers’ Skype channel.

The views, thoughts and opinions expressed here are the authors alone and do not necessarily reflect or represent the views and opinions of Cointelegraph.