During last year the value of Bitcoin (BTC) sent to darknet markets increased by 70 percent, according to a Chainalysis report published on Jan. 18.

The Chainalysis report points out that darknet activity is relatively not influenced by Bitcoin’s price action and does not necessarily drop when the price drops. According to the data contained in the report, in 2018 the relationship between the value of darknet market transactions and Bitcoin’s market performance was inverse.

Over the course of 2018, the total value sent to darknet markets saw a notable 70 percent increase, while total Bitcoin economic transaction value dropped throughout the year. 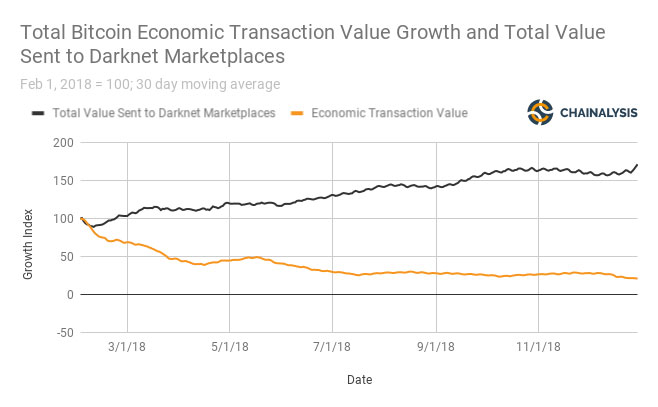 According to Chainalysis data, the total dollar value of darknet market transactions has been steadily rising since 2011. The value peaked in 2017 at $707 million and decreased approximately 14 percent to $603 million in 2018. According to the report, the decrease in value from 2017 to 2018 is attributable to the closure of popular darknet market Alphabay in mid-2017, which reportedly saw darknet market activity fall by 60 percent. 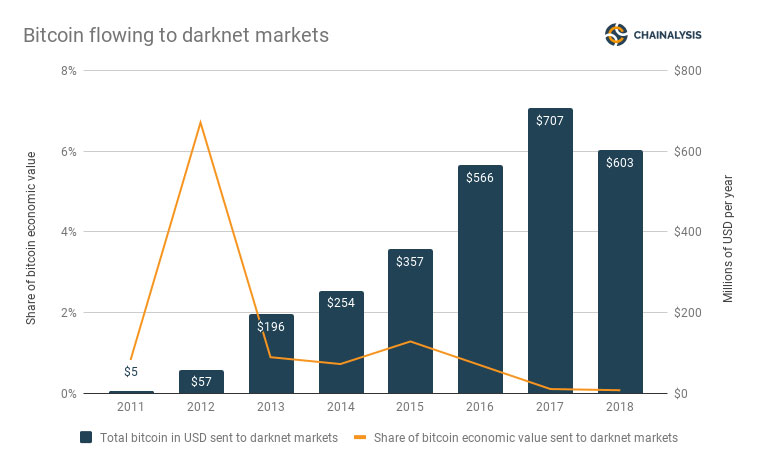 Furthermore, after Alphabay’s closure, various other markets reportedly have taken its place,  creating what the report dubs is “the whack-a-mole problem with darknet markets.” This lead to another phase of steady increase in the value of such transactions in 2018. The report also notes:

“There’s some evidence that darknet activity even increases after closures.”

As Cointelegraph reported in December last year, Cypherpunks co-founder Timothy C. May, who died of natural causes about one month ago, forecasted in his Crypto Anarchist Manifesto that “crypto anarchy will allow national secrets to be traded freely and will allow illicit and stolen materials to be traded.”

In a dedicated analysis published in March 2018, Cointelegraph reported data from various sources pointing out that cash, and specifically United States dollars, remain the preferred method of payment for illicit goods and services. The report stated that while half of Bitcoin has at some stage been used for illegal purchases, a whopping 90 percent of U.S. dollar bills hold traces of cocaine.

In October 2014, the founder of the darknet market search engine Grams declared that “the darknet was created mainly to fight the tyranny of governments” before concluding: