Over the last 10 days the cryptocurrency markets have endured a massive sell-off across the board.

There are a number of reasons that have led to the highly bearish sentiments on the market but seeing red has been difficult for many. As the value of Bitcoin and numerous altcoins have continued to decline to depressing levels, and a certain amount of panic has ensued. 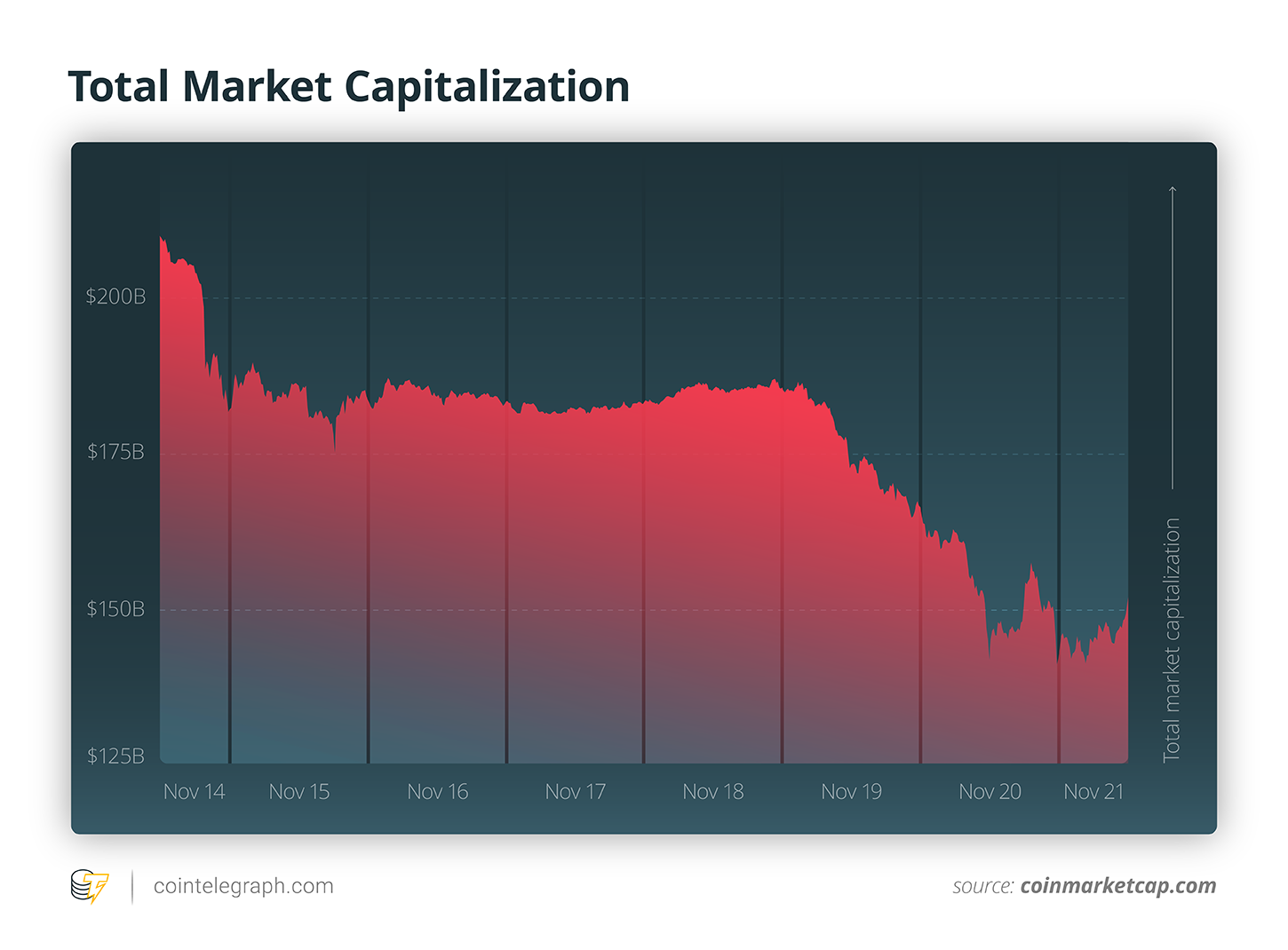 Cointelegraph has reached out to various industry professionals to explore the reasons behind this most recent slump in the market and what to possibly expect in the coming weeks and months.

To understand why the markets have plunged into the red, one must explore the varying socioeconomic factors that have had a negative effect with investor sentiment on traditional and cryptocurrency markets.

Firstly, Lee points to the recent Bitcoin Cash fork has been a major talking point over the past few weeks and the build up to the hash rate war caused serious uncertainty in the market. Last week Coinshares CSO, Meltem Demirors, said this has led to institutional investors taking money out to avoid the risk and uncertainty around the hard fork.

The contentious split in the Bitcoin Cash blockchain occurred on November 15, resulting in two competing chains Bitcoin ABC and Bitcoin SV. As a result, the value of BCH has suffered just as much as the rest.

In addition to this, Lee believes that regulatory pressures have played a role in the bearish atmosphere, highlighting the SEC’s decision to institute the first ever levies against a couple Initial Coin Offerings (ICO) that were deemed to have actually been securities offerings. Another contributor to negative sentiments are reports of fresh investigations into the affairs of controversial stablecoin Tether (USDT).

“Does this mean Bitcoin is broken? No”

The outlook for traditional markets have been just as bleak, with analysts forecasting a looming “flash crash” in the wake of a sell off in the cryptocurrency and oil markets. Lee summed this up as a sign of the times:

“Markets around the world are fragile and panic and sentiment are playing a disproportionate role right now. Does this mean Bitcoin is broken? No. The use case is still there but in the short term, panics are panics.”

Economic tensions have also affected global trade and higher interest rates aren’t helping the situation, according to the Organization for Economic Cooperation and Development.

As Greenspan explained, all of these factors have contributed to the stresses across multiple markets.

“There are a lot of side stories at the moment but I feel the major driving factors are the technical breakout that we saw last week and the global macroeconomic cycle that is currently hitting the stock market. In 2017 we saw abundance across all markets due to central bank loose money policy. Now that the central banks are raising rates again, money may become scarce and people are taking a lot of their investments off the table.”

While the Bitcoin Cash fork has been identified as a major factor in this most recent downturn, others have pointed to the fact that the crypto markets have showed signs of a serious decline in recent weeks.

As previously reported by Cointelegraph, analysts noted that Bitcoin was struggling to move into an uptrend support. The preeminent cryptocurrency was unable to move past the lower $6,000 regions. Trade volumes and activity were low and uncertainty grew, leading to the aggressive selloff.

Gabor Gurbacs, digital asset strategist and director at VanEck, told Cointelegraph that traditional markets had endured corrections as businesses looked to consolidate before the end of the year.

“During the past month, however, Bitcoin and digital assets were fairly stable while the equity and bond markets have gone through a significant correction. The recent turbulence is due to the combination of some systematic end of the year selling (that is businesses are closing their books) and some mess around the Bitcoin Cash fork.”

In line with this analysis, Anthony Pompliano, host of popular crypto podcast and newsletter “Off The Chain,” has been addressing the current market woes over the past fews days. Responding to Cointelegraph, Pompliano highlighted three driving factors for the recent downturn:

“Technicals showing more downward movement, historical analysis shows we need to go further, and psychological argument is there is not enough blood in the streets. Add in the selling pressure from funds and ICOs, you get a perfect storm for further market contraction.”

“It’s a usual downtrend in the bear market that has characterized much of 2018. The recent Bitcoin Cash contentious fork, combined with regulatory uncertainty regarding ICOs with recent SEC decisions against some token sales, added to the overall negative sentiment.”

Price predictions are notoriously difficult to make in the cryptocurrency sphere but analysts are able to glean a lot from price movements and charts.

According to Greenspan, it is not easy to make any assumptions of what the markets will do in the next six weeks and he believes things could go either way:

“It’s impossible to say for sure. Now that Bitcoin has broken the key psychological level of $5,000 the next logical level of support we can spot on the graph isn’t until $3,000. It doesn’t necessarily have to get there though. If it turns around now it would be a very bullish sign indeed.

“I feel like the last of the panic sellers are now showing their hands. There are many cryptotraders who are happy to go on hodling even if we do see lower prices. As well, the incoming large financial institutions are most likely accumulating already at these prices.”

Pompliano offered a more philosophical outlook in his latest newsletter, highlighting the fundamental aspects of Bitcoin as a saving grace that cannot be controlled or enforced by any single entity:

“It is important to remember that Bitcoin is not a traditional asset. There is no monetary policy decision that will be the catalyst for a recovery. The government can’t deem it too big to fail. There is no one who can step in and halt trading. Bitcoin lives and dies on its own.

“While that may be scary to traditional market investors, this is the attraction to true crypto believers. They understand the asset will have volatile swings on a frequent basis. They know that there are few synthetic protections in place for investors. Bitcoin is the ultimate test: How much conviction do you truly have?”

Even at current levels, Lee has produced a fairly optimistic outlook for the cryptocurrency markets before the end of the year. Lee reiterated his $15,000 Bitcoin price prediction earlier this week, even amid deepening lows. Lee believes further regulatory clarity will also ease uncertainty, which has gripped the space for most of 2018.

The Fundstrat co-founder believes that institutional investors will be the driving force behind a market resurgence. This will be led by the predicted launch of Bakkt in January 2019, a digital assets platform created by The Intercontinental Exchange (ICE), the operator of leading global exchanges, including the New York Stock Exchange (NYSE).

The bearish climate led to Lingham producing a far more conservative outlook leading into December and the new year. He said it was hard to see Bitcoin breaking past $6,000 in 2018 – and stressed the need for blockchain projects to create widely usable solutions:

“The market needs to find and prove more use cases, companies that are building on top of blockchain need to prove real utility. The industry needs to start to show technology adoption beyond pilots in 2019 and create value add. The market has had too many pipe dreams and Lambos in the past 2 years. The climate can change once more companies with solid use cases emerge from their development cycles, gain traction and prove sound business value to make a difference. Ones who won’t hit these milestones will continue to be wiped out.”

As of November 22, the crypto markets look to have stopped their drastic slide, with cryptocurrencies’ prices still being shaky, but seeing only mild losses.