Over several hours on May 3, the price of bitcoin spiked from around $5,300 to over $5,700 in major markets, allowing the crypto market to gain more than $7 billion in a single day. 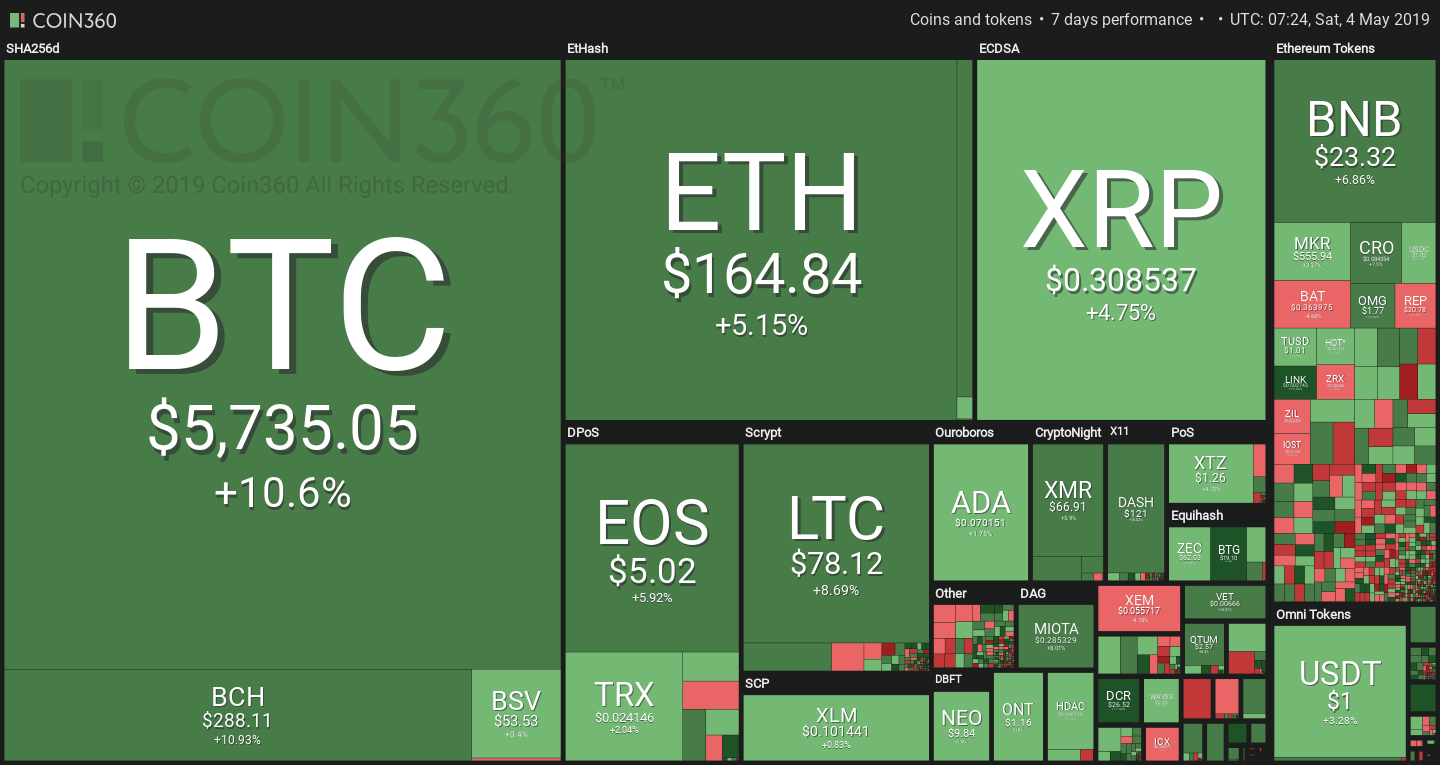 Major crypto assets such as ether (ETH), litecoin (LTC), bitcoin cash (BCH) and EOS recorded gains in the range of 4% to 8% against the United States dollar, fueling the momentum of the crypto market.

Timing of bitcoin recovery is interesting

The abrupt recovery of the crypto market led by the strong upside price movement of bitcoin was largely unexpected due to the controversy surrounding iFinex, the company that oversees the operations of Tether and Bitfinex.

On April 25, the office of the New York Attorney General (NYAG) Letitia James filed a lawsuit against iFinex, alleging Bitfinex of using $900 million taken from Tether’s cash reserve in an attempt to “hide” its $850 million loss.

The NYAG’s office said that Bitfinex sent $850 million to a “bank” based in Panama called Crypto Capital Corp, which allegedly provided banking services to a variety of crypto exchanges that struggled to gain services from major financial institutions.

Ultimately, Bitfinex is said to have failed in recouping $850 million that was sent to Crypto Capital Corp, which likely led the firm to receive a $900 million loan from Tether.

The official document released by the NYAG’s office, which emphasized that the dealing between Bitfinex and Tether were not disclosed to users and investors, read:

“According to the filings, Bitfinex has already taken at least $700 million from Tether’s reserves. Those transactions — which also have not been disclosed to investors — treat Tether’s cash reserves as Bitfinex’s corporate slush fund, and are being used to hide Bitfinex’s massive, undisclosed losses and inability to handle customer withdrawals.”

Yet, despite the troubling development in the iFinex-Bitfinex case, the price of bitcoin has increased from $5,135 to over $5,735 in the past week as of press time.

What triggered the bitcoin rally?

In an exclusive interview with Cointelegraph, Crypto Rand, a widely recognized cryptocurrency trader and technical analyst, said that the upside movement of bitcoin and the rest of the market may have been simply technical.

According to the analyst, throughout the past two weeks, technical indicators were pointing toward a bullish momentum for bitcoin. As the market recovered fairly quickly from the Tether scandal, it likely boosted the confidence of existing investors in the market.

“For me, there is no fundamental reason behind. The Tether situation caused a dump that was recovered in no time. But even that dump stopped in the uptrend range channel support without causing major damages to the macrostructure. My perspective about it is clear. All relays on TA. It was looking pretty bullish since two weeks [ago].”

Immediately after Tether and Bitfinex’s general counsel, Stuart Hoegner, disclosed in an affidavit submitted to the Supreme Court of the State of New York, eToro CEO Yoni Assia suggested that the incident could serve as a catalyst for the near-term rally of bitcoin.

“Are the news supposed to pump or dump BTC? It’s bad news, but if $2 billion USDT get exchanged to BTC it actually increases its price… what a predicament. Tether Lawyer Admits Stablecoin Now 74% Backed by Cash and Equivalents,” Assia said.

As Tether holders began to sell the stablecoin for bitcoin — anticipating the stablecoin to lose its peg to the U.S. dollar — it may have driven the demand for the asset on paper. Tether investors buying bitcoin to either keep their funds in bitcoin or to sell for fiat could have fueled the momentum of the asset.

Can bitcoin sustain its current momentum?

Several prominent investors in the crypto space such as Vinny Lingham from Multicoin Capital have said that bitcoin surpassing the $6,200 to $6,400 range would officially signal the beginning of a new bull market. Lingham said:

“The key indicator for the start of a sustainable bull run is likely a decoupling of asset values from Bitcoin (i.e. Bitcoin’s strength weakens other networks or vice versa). Anything else is just speculation again (maybe we need another bubble to learn more lessons?

“That said, if we can break $6,200 for BTC, it will likely mark the start of another major bull run and could run hot and high, but if it’s pure speculation and other assets benefit disproportionately to value created, it’s likely not going to end well again!” 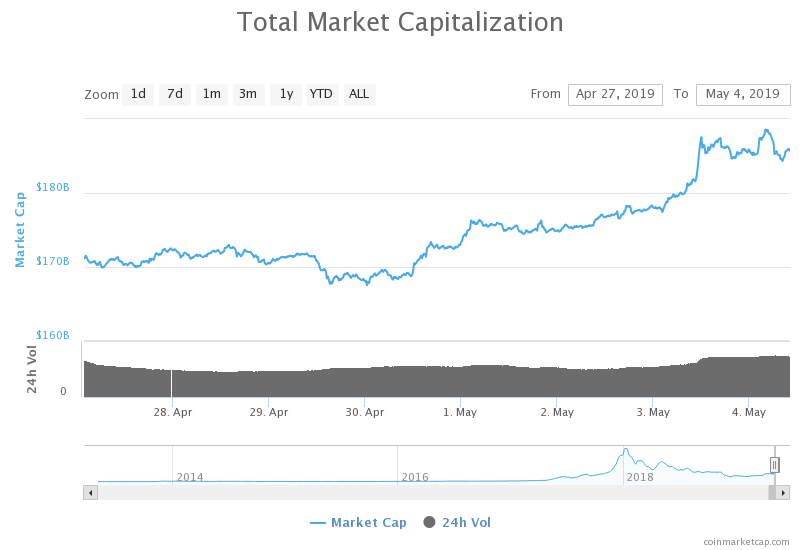 The valuation of the crypto market has recovered to $185 billion, adding $7 billion overnight

But, some traders in the cryptocurrency sector remain cautious on the short-term trend of the asset because of both technical and fundamental factors.

DonAlt, a cryptocurrency technical analyst, for instance, said that the Bitfinex premium indicates the lack of stability in the market that could potentially leave the asset vulnerable to a drop below $5,000.

Crypto Rand told Cointelegraph that bitcoin is facing strong resistance and that it may take several months to break past the resistance, which suggests that in the short-term, the asset may struggle to break out of the $6,000 region:

“Right now we are facing probably the strongest horizontal resistance on the whole Bitcoin chart. I don’t think it will be easy to cross but I’m confident about a breakout during the next months; a breakout that will unfold another bull run. One indicator I’m following closely to track the status of BTC its market capitalization, which right now is showing clear momentum after crossing the $100 billion mark or the first time in 2019.”

Momentum has been building since December

In recent months, bitcoin has largely depended on momentum and technical factors to record upside movements.

The highly anticipated block reward halving that is expected to occur in May 2020 is considered a strong fundamental factor that could serve as a solid catalyst for the medium-term price trend of the asset.

But, most of the year-to-date gain of bitcoin from $3,150 to $5,700 is likely to have started with a sudden surge in the price of bitcoin from $4,200 to $5,000 in the first week of April, which also was caused by technical factors boosted by a spike in the volume of the CME bitcoin futures market. Mati Greenspan, a senior analyst at eToro, told Cointelegraph in an interview:

“The crypto market has been gathering a lot of momentum since the mid-December lows and it seems a lot of traders are turning bullish. The April 2nd surge broke us through some significant barriers and this morning we’re even pushing further.”

In the foreseeable future, while some traders have expressed concerns about the Tether controversy, Greenspan noted that if investors dump Tether on the market, investors will likely end up buying bitcoin, further pushing the demand for the asset up.

“Any erosion of trust is more likely to send Bitcoin up rather than down. At the moment there is about $2.8 billion parked in Tether. If investors end up dumping it, they’ll probably just buy Bitcoin.”

In the past several days, the “real 10” volume of bitcoin, the legitimate daily spot volume of bitcoin calculated using the methodology presented by Bitwise Asset Management, has increased to nearly $900 million, based on data provided by OnChainFX.

In March, Bitwise Asset Management calculated the “real 10” volume — which is composed of volume from exchanges with at least $1 million in daily bitcoin volume — to be around $270 million.

In comparison with early March, the volume of bitcoin has increased by more than 200% in less than a month.

Recovering from a panic sell-off in November 2018

Part of a reason behind the struggle of bitcoin to rebound above the $5,000 level from January to March was the abrupt decline in the price of BTC from $6,300 to $3,820 in late November of last year.

Within two weeks, the price of BTC plunged by nearly 40 percent against the U.S. dollar, leading many retail investors to panic sell.

“The November drop seems to be a capitulation pattern where investors sold out of apathy and despair. Once the $5,000 level was broken we even saw a bit of panic selling,” Greenspan said.

In the upcoming weeks, traders are likely to focus on evaluating various stimuli that may push BTC above the crucial $6,000 level.

Alex Krüger, a global markets analyst, noted that the 2018 bear trend came to an end when bitcoin surpassed $4,200 and that a new bull market is likely to start as BTC surpasses $6,400.

Some positive fundamental indicators that could restore the confidence of investors as bitcoin approaches its block reward halving is the rise of bitcoin’s transaction volume, hash rate and trading volume.