On November 20, the exchange responded to those allegations, essentially defending its decision and promising to provide evidence if the case goes to court. Curiously, it is at least the third time this year that OKEx has shown strange price volatility on their exchange. 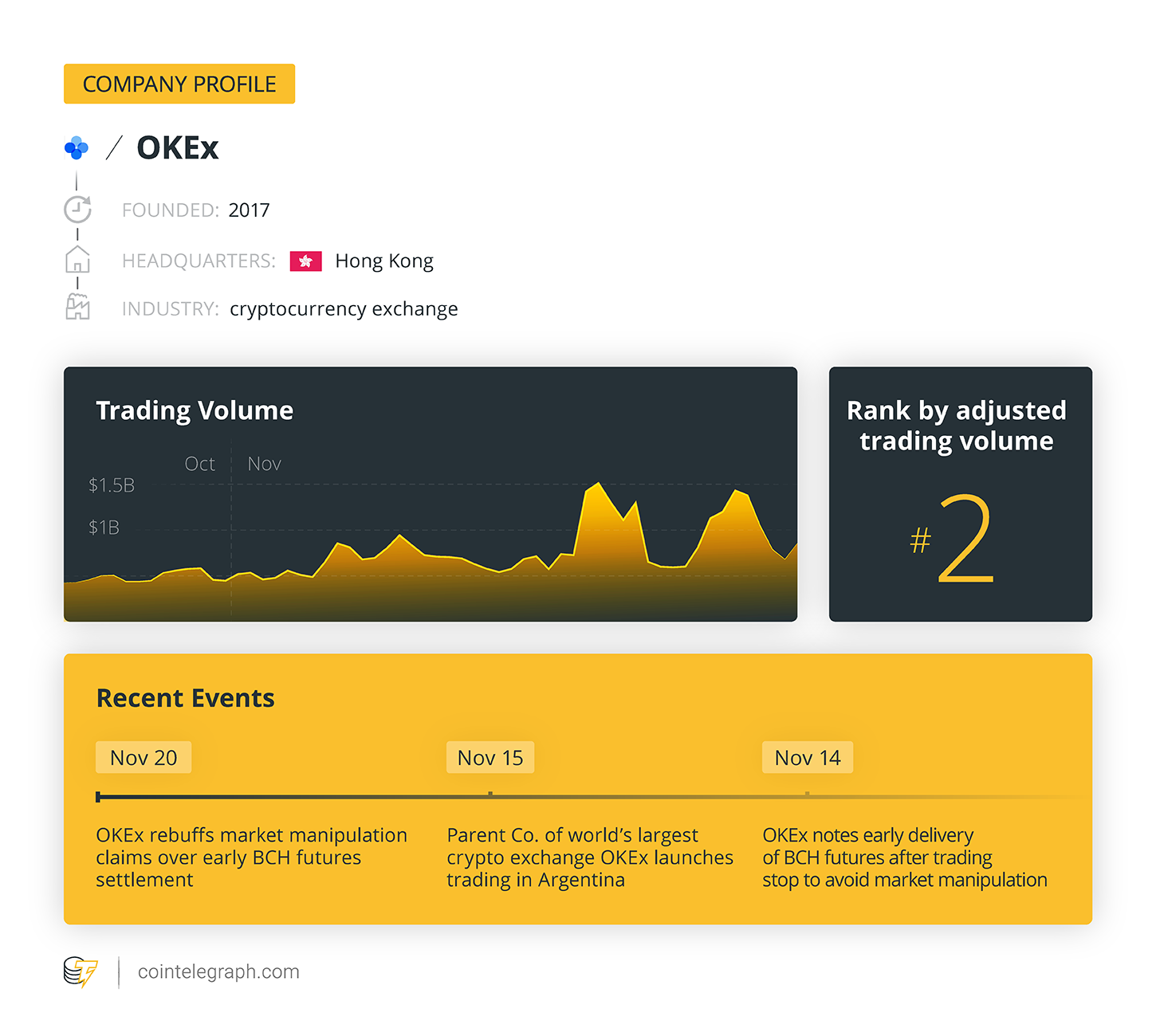 OKEx was founded in 2017 as an international arm of the no longer operating Chinese exchange OKCoin. According to data from CoinMarketCap, it is currently the second largest player by volume, handling more than $1 billion worth of crypto trades per day. OKEx is based in Belize and has an operating hub in Hong Kong. Moreover, in April 2018, the company expanded its presence to Malta, citing their “confidence” in the local government’s approach to cryptocurrencies.

The exchange has been focusing on futures trading, which is basically an agreement to buy or sell an asset on a specific future date at a specific price, hence representing a risk management tool for investors.

On Nov. 14, amidst the Bitcoin Cash hard fork that resulted in two different blockchains, BCH ABC and BCH SV, being born, OKEx abruptly forced the early settlement of its Bitcoin Cash contracts “to avoid potential losses to [their] customers caused by the short-term volatility and possible market manipulation attempts.” Thus, the BCH future contracts were settled early against the last traded price at early Nov 14, shortly after the announcement.

The move was criticized by a number of investors, who claimed that they had suffered major losses as a result of OKEx’ decision. Namely, Amber AI, a Hong Kong-based crypto firm co-founded by former Morgan Stanley trader Tiantian Kullander, as per LinkedIn, published a Medium article on the matter, arguing that OKex had changed the rules of the settlement index by discontinuing to reference Bitfinex prices before the early settlement. The update details were published on November 12, just two days prior to the event:

“By changing the settlement date and delivery rule against the open interest in the market, [OKex] invalidated their previous announcement. This meant that for each short position carried in the contract, OKEx implicitly imposed a fixed loss on the notional amount, delivering the contract 20% higher vs fair value.

“This is no different than the Chicago Mercantile Exchange (CME) announcing that the S&P 500 E-Mini Futures will settle against the Shanghai Composite Index in the midst of trading.”

Additionally, Amber AI accused OKex of intentionally malfunctioning the order submission system on Nov. 15, during BCH “most volatile trading session in 9 months.” According to the crypto company, traders were unable to submit their orders due to a “Limit Order Bug,” although OKEx continued to operate at large:

“Recorded level-2 data throughout this period shows the order matching engine as functioning. The exchange continued to host traffic and operate but with all order submissions blocked, except buy-orders below the best bid, and sell-orders above the best offer.”

Amber AI continued with even more allegations by claiming that OKex “sponsored” a company called ‘Honeycomb Finance’ to publish a Reddit post allegedly supporting the exchange’s point of view. Finally, Amber AI claimed that OKEx ultimately imposed a BSV liability for its BCH borrowers despite allegedly writing that “users who have outstanding borrow of BCH, […] will not need to repay BSV” before silently updating its announcement.

Ultimately, traders lost “$24 million” due to the incident, the post argues, continuing:

“The course of events surrounding the BCH hard fork are indicative of market manipulation, fraud and deceit.”

There were others who have voiced their discontent in regards to how OKex handled the BCH hard fork. Thus, Qiao Changhe, the founder of Beijing-based Consensus Technologies, told Bloomberg that his fund lost $700,000 because its hedging position on OKEx “was abruptly closed at a level that didn’t reflect prevailing market prices”:

“OKEx is losing its credibility […] The futures contract became something nonsense, not something we could use to hedge.”

Changhe also added that he was going to reduce his $5 million fund’s use of OKEx because of that incident. Bloomberg mentions four other alleged traders who chose to stay anonymous, but also confirmed that they were going to limit or end their relationships with the exchange. One of them reportedly filed a complaint with Hong Kong’s Securities and Futures Commission (SFC), whilst the agency’s spokesman declined to comment after being approached by Bloomberg.

OKEx has issued a number of comments regarding the incident. First, the exchange explained its reasoning in a blog post published shortly after the hard fork, on Nov. 15. In it, OKEx said that they brought the delivery time earlier because of strong volatility and unclarity of “the final outcome.”

“An early announcement may make room for market manipulation and cause loss to our users,” the exchange added when explaining the urgency of the move.

Further, on Nov. 19, Andy Cheung, head of operations at OKEx, echoed that response in a comment for Bloomberg:

“After considering various scenarios, we decided that an early settlement was the most fair and rational decision to maintain an orderly market.”

On Nov. 20, OKEx directly addressed Amber AI’s article via Medium. First, the exchange claimed that they “do not have an institutional client profile named Amber AI, while Amber AI claim themselves as a Hong Kong-based company,” adding that OKEx “[does not] serve any customer in Hong Kong, in respect of the local laws and regulations”.

“The OKEx account that Amber AI claimed managing is an individual account, which is not a Hong Kong resident or entity on the report of the KYC information,” the exchange then disclosed. “Amber AI made a profit from the individual account on OKEx they claimed to have managed during the early delivery.”

More importantly, OKEx denied any manipulation, noting that Amber AI’s statements “have caused serious damages to OKEx’ reputation” and that “majority of [OKex’] users supports our decision of early delivery of BCH futures contracts.” The exchange also stated that it is ready to address the allegations in court:

“We will disclose the evidence required to the court to prove that OKEx is not involved in the alleged trading when deemed necessary. We reaffirm that we will NEVER [sic] trade against our customers and manipulate the market.”

There are at least two other similar incidents involving OKEx that happened in 2018. First, there was an abnormal pricing drop on March 30 when the exchange posted quarterly futures market that were significantly lower BTC/USD readings comparing to the rest of the market. In a video that was circulating on Twitter at the time, an OKEx trader who allegedly lost 11 mln yuan ($1.75 mln) in the debacle was threatening CEO with committing suicide by drinking poison at the exchange’s office in Hong Kong.

OKEx blamed the issue on users closing huge numbers of contracts “regardless of costs.”

“OKEx has the right to warn against all unethical behavior such as malicious manipulation of prices, malicious influence on trading systems, restrictions on trading, shutting down of accounts, etc.,” the company’s statement shared with clients read. OKEx also confirmed that a rollback had been completed, and that normal trading operations would resume shortly.

Furthermore, in August, OKEx featured in another situation involving strange market fluctuation after forced liquidation of a large misfired Bitcoin futures trade worth $416 million was initiated by an unknown trader.

Due to the “sheer size of the order” — a hefty 4,168,515 contracts, according to the exchange — OKEx said it took preemptive action, explaining that their risk team asked the client to “partially close the positions to reduce the overall market risks” several times.

“However, the client refused to cooperate, which lead to our decision of freezing the client’s account to prevent further positions increasing  Shortly after this…unfortunately, the BTC price tumbled, causing the liquidation of the account.”

The exchange then allegedly injected 2,500 BTC (around $18.5 million at the time) into an insurance fund to help mitigate the losses incurred by the force-liquidated trade.

Crucially, it was revealed that aside from this insurance cover, the platform did not provide the funds that traders use to leverage their futures contracts. Instead, it relied on the so-called “socialized claw-back” policy for such cases, meaning that the losses from the unfilled order would need to be covered by counterpart traders. In that particular instance, some traders were set to lose 18 percent of their profits.

In a comment for Cointelegraph at the time, OKEx head of operations, Andy Cheung, claimed that this had been a “valuable lesson” for him and OKEx.