Saturday, Nov. 23: crypto markets have seen some volatility on the day, but failed to hold a sharp rebound attempt. The top 20 cryptocurrencies by market cap are seeing their prices stabilize after another sell-off yesterday, according to CoinMarketCap.

As of press time, the major 20 crypto markets are seeing a mix of red and green, with most gains fluctuating around 1-2 percent. 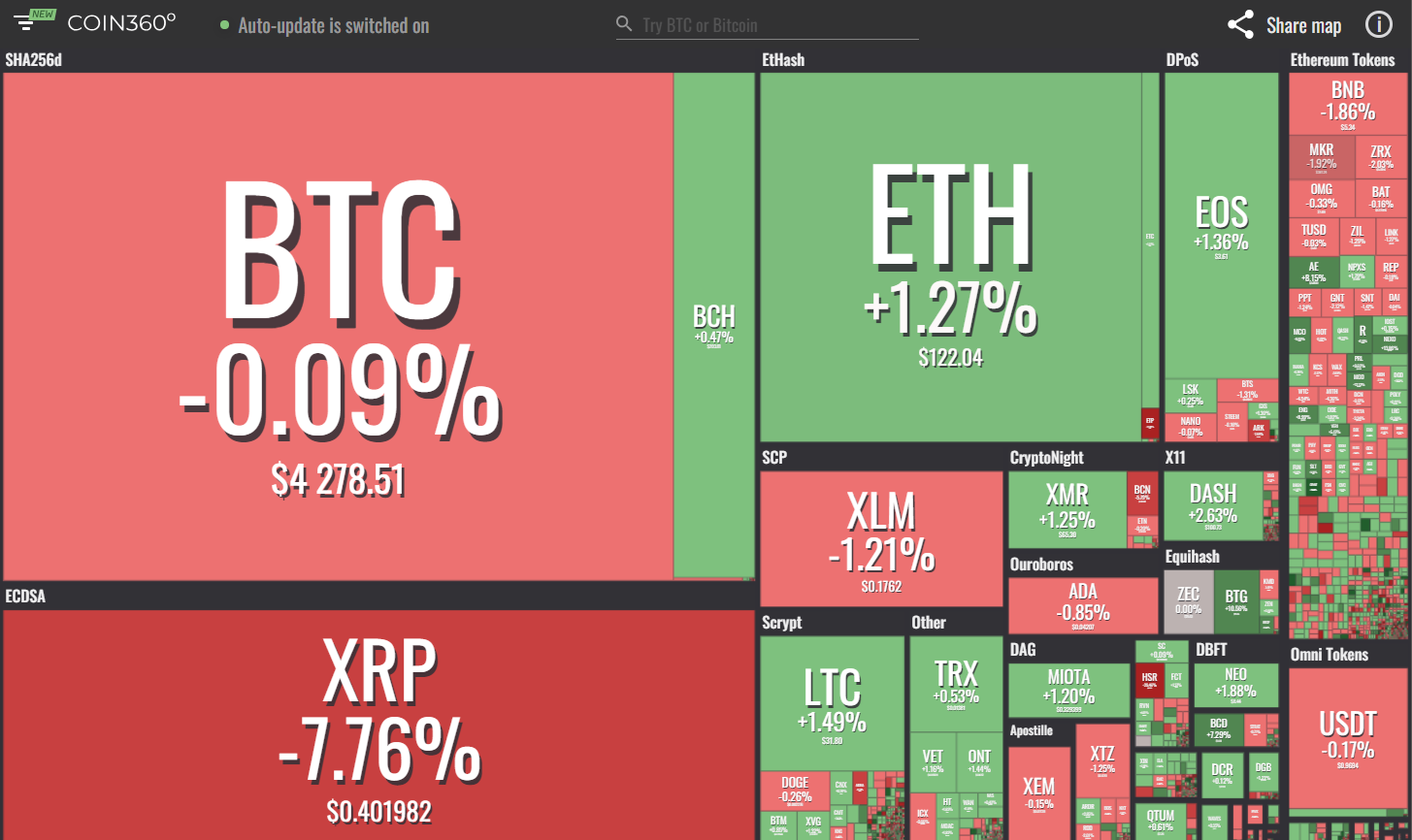 Bitcoin Gold (BTG), ranked 20th by market cap, has seen the biggest growth on the day, spiking almost 10 percent over the past 24 hours. At press time, the altcoin is trading at around $20.70.

In early September this year, Bitcoin Gold was delisted from major crypto exchange Bittrex, following a $18 million hack of the BTG network in May. The “double-spending” hacking vulnerability of Bitcoin Gold reportedly allowed hijackers to take control over 51 percent of the BTG hashrate.

Bitcoin (BTC) is slightly down around 1 percent over the day, and trading around at $4,225 at press time. Earlier in the day, the major cryptocurrency spiked to as high as $4,413, but failed to hold the rebound trend and dropped to its 24-hour low at press time.

Bitcoin is down almost 24 percent over the past 7 days.

Ripple (XRP), still holding its place as the second top cryptocurrency by market cap after replacing Ethereum (ETH), is also slightly down around 1 percent on the day to press time.

Ethereum is seeing even less movement on the day, down just 0.23 percent and trading at $120.69 at press time.

Total market capitalization of all cryptocurrencies is around $136.3 billion at press time, down from its high this week of $187 billion. Daily trade volume is just under $12 billion, while Bitcoin’s dominance on the market constitutes around 53.9 percent.

Ran Neuner, the host of CNBC’s CryptoTrader show, has commented on the shaky state of the market on Twitter today, arguing that trying to speculate in crypto is not the genuine purpose of the industry:

“Bear markets shake out weak hands, those only here for money, those trying to make a buck trading & those trying to profit w/out building or adding value. Look around, you can see who will be around when it’s done & who won’t. If you want to survive this, build something, add value.”

Recently, Stephen Innes, head of trading at Singapore-based capital market service OANDA Asia Pacific, predicted that gold prices will “jump considerably higher and there’s an inverse relationship we’re starting to see with gold and coins,” while Bitcoin could fall to as low as $2,500 by January 2019.

Today, Anthony Pompliano, founder and partner at Morgan Creek Digital Assets, tweeted that traditional assets are in fact “taking a beating,” in line with the recent collapse of crypto markets. The expert pointed out that oil is down 30 percent over 7 weeks, while Facebook, Apple, Amazon, Netflix and Google (“FAANG”) are down 20-40 percent from their all-time highs, and the Dow Jones Industrial Average (DOW) had its “worst Thanksgiving week since 2011.”

In an interview with CNBC Nov. 23, Michael Moro, the CEO of cryptocurrency trading companies Genesis Trading and Genesis Capital Trading, said that the Bitcoin price could bottom at $3,000, stating, “You really won’t find [the floor] until you kind of hit the 3K-flat level.”